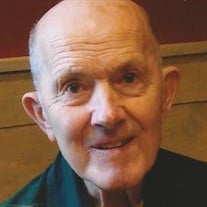 Marvin “Marv” W. Pierquet, 93, Green Bay passed away peacefully on Sunday, September 6, 2015. Marv was born on October 27, 1921 in Green Bay the son of the now late Antone and Laura (Kriescher) Pierquet. He was a graduate of Green Bay East High School with the class of 1940. Marv served his country in The United States Airforce during W.W. II with the 2136th Base Unit as a gunsight and power turret mechanic as well as a machine gun instructor until his honorable discharge in December of 1945. While he was home on furlough he asked the love of his life Jeanette Polman’s hand in marriage and the two were married on July 4, 1945. The couple enjoyed over 63 years together, Jeanette preceded him in death on October 2, 2008. Marv had worked in construction with the Frank O. Zeise Construction Company his whole life and was proud of all the schools, banks, fire stations, professional buildings and so many other projects in the Green Bay area that had his stamp on it. He loved the outdoors and was huge hunter and fisherman. Marv had a huge heart and was always willing to lend a hand to anyone in need. Marv is survived by two daughters, Holly and Mike Charles, Green Bay; Kris and Steve Hock, Green Bay; two sons Pat Pierquet, Wooster, OH; Bill and Sam Pierquet, Acworth, GA; six grandchildren Sarah and CJ Langjahr, Joel Charles and Katie Christensen, Megan and Eric Rentmeester, Brianne Charles, Peter Pierquet and Gabrielle and Houston Jacobs, five great-grandchildren, one daughter-in-law Sandy Pierquet, his siblings Shirley and Jim Morgan, Myrna and Bub Pasterski, Katie La Luzerne, Loreen and Larry Cumber, Mose Pierquet, sisters-in-law Helen Pierquet, Delores Pierquet, Lucille Pierquet, Eunice Pohlman. He is further survived by many nieces, nephews other relatives and friends. He was preceded in death by one son Jeff, one grandchild, 3 sisters and 7 brothers. Gathering of family and friends will be held on Saturday, September 12, 2015 from 9:00 A.M. to 10:30 A.M. at the Shrine of the Good Shepherd Chapel Mausoleum 2770 Bay Settlement Road. A Funeral Service will be held at 10:30 A.M. in the chapel with Rev. David Hatch officiating. In honor and dedication of Marv’s service to his country Military Honor Rites will immediately follow. Burial in the Cemetery. In lieu of flowers a memorial donations may be made to The Alzheimers Association 2900 Curry Lane, Suite A Green Bay, WI 54311~ or~ the Leukemia and Lymphoma Society P.O. Box 12268 Newport News, VA 23612. The family would like to extend a special thank you to the staffs of Bishops Court for their wonderful care of Marv. Also, a warm note of appreciation to Unity Hospice for making his final days more peaceful.

The family of Mr. Marvin Pierquet created this Life Tributes page to make it easy to share your memories.

Send flowers to the Pierquet family.