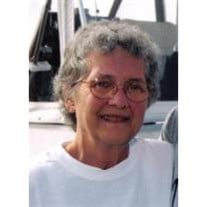 Marian O. Beyer, age 71, passed away peacefully in her home surrounded by her family after a long and courageous battle with COPD on Saturday, October 25, 2008. She was born February 2. 1937 in Green Bay to the late August and Odile Heraly. She married Lawrence Beyer on October 5, 1957 who she spent 51 loving years with. Marian took great pride helping her son start a business, Healthy Horizons of which she took a great passion for the field of natural health and nutrition. She loved helping people and made many friends while doing so. She liked going up north to their cottage in Crivitz where she enjoyed rowing, fishing, swimming, riding the pontoon boat, and relaxing with family. At home she enjoyed sewing, cooking, gardening, reading, and listening to talk radio. In the earlier years, she enjoyed golfing and bowling. Marian was a very hard worker a dedicated, loving mother and grandmother. She and her husband built their house, board by board and brick by brick, which they took pride in and lived in for 42 years. She also took care of her mother (who she thought the world of) for many years at her home making sure that she got the best of care. Marian loved animals and found great companionship with her two dogs Shadow and Molly as well as her belated dog Kipper. Some of her happiest times were vacationing in Fort Myers Beach, FL and spending time with her grandchildren. Marian is survived by her husband, Larry, DePere, her three children, Rick (Cheryl) Beyer, Sobieski, Troy (Jennifer) Beyer, DePere and Chad Beyer, Seymour and special friend, Joanna Hanson. Six grandchildren, Jessica, Ashley, Alex, Kerri, Stephanie, Noah, and one great-granddaughter, Julia. Also surviving is her brother, Gordon (Mareen) Heraly, sister-in-law, Muriel Heraly and other relatives and friends. She is also leaving behind her two loving dogs, Shadow and Molly. She was preceded in death by her father, August Heraly and mother, Odile Heraly, brother, Norman Heraly, nephew, Gordy Heraly, Jr, granddaughter, Courtney Beyer and grandson, Eric Beyer. Marian’s wish was to be cremated with no funeral service and to be buried next to her parents.In lieu of flowers, a memorial fund has been established in her name. You will be greatly missed by family and friends. Even though we weren’t ready to let you go, God must have had a greater purpose for you in heaven.

Marian O. Beyer, age 71, passed away peacefully in her home surrounded by her family after a long and courageous battle with COPD on Saturday, October 25, 2008. She was born February 2. 1937 in Green Bay to the late August and Odile Heraly.... View Obituary & Service Information

The family of Marian Beyer created this Life Tributes page to make it easy to share your memories.

Send flowers to the Beyer family.