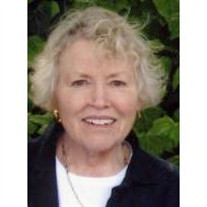 Marcia Daniell Blanchard, 71, Green Bay passed away Thursday, May 14, 2009 of lung cancer at Bellin Memorial Hospital. Marcia was born in Green Bay on January 20, 1938 at Bellin Hospital to William Irving Daniell and Hulda Armeda (Floodstrand) Daniell. She graduated from East High in 1956 and attended Northwestern University. She married James Blanchard on January 26, 1958, and moved to Ann Arbor Michigan where her husband was attending law school and where their first two children were born. Marcia and her husband raised six children, while living predominantly in Winnetka, Illinois and in Green Bay. James currently resides in Burr Ridge, Illinois. She is survived by her six children, fourteen grandchildren, and two sisters, Irene Kress of Green Bay and Roberta Elliott of Melrose, Florida. She is preceded in death by her infant son, Jonathan, in 1962, and by her sister, Virginia. Her son, Will, lives in Cambridge, MA with his wife, Victoria Harris, and their children, Lillian and James. Her son, Eric, lives in San Jose, CA with his wife, Martha Jaquez, and their children, Isabel, Nicolas, and Jonathan. Her son, Peter, lives in Iowa City, IA with his wife, Meena Khandelwal, and their children, Uma and Jaya. Her son, Christopher, lives in Grand Rapids, MI with his wife, Laurie, and their children, Sophie, Julia, and Ben. Her son, Michael, lives in Downers Grove, IL with his wife, Katie, and their children, Abigail, Belle, and Harley. Her daughter, Anne, lives in Baltimore, MD with her husband, Michael Kahn, and their son, Harrison. Visiting hours will be from 9:30am to 11:00am on Tuesday, May 19, 2009 at Union Congregational Church, 716 S. Madison Street. A Memorial Service will be held at 11:00am. with the Rev. Dr. Chuck Mize officiating. Online condolences may be expressed at www.hansenfuneralservice.com. In lieu of flowers memorial donations may be made in her name to the Salvation Army of Brown County

The family of Marcia Daniell Blanchard created this Life Tributes page to make it easy to share your memories.

Send flowers to the Blanchard family.