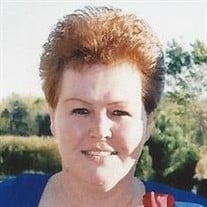 LouAnn Hendricks, 63, Green Bay passed away on Saturday, November 18, 2017, with her family by her side. LouAnn was born on April 28, 1954 in Green Bay the daughter of the now late Norbert and Regina (Bartkowiak) Hendricks. LouAnn was a graduate of Green Bay West High School with the class of 1972. She was employed at Shopko Optical Manufacturing as a Production Specialist for many years until her retirement earlier this year. LouAnn was an animal lover at heart and held a special place for birds especially Cardinals and loved her dog Smooch. She cherished her family and the many family get togethers and greatly adored her grandchildren~she loved them with a love like no other. LouAnn was a loving mom, grandma, sister, daughter, a friend to many and will always be lovingly remembered and sorrowfully missed. LouAnn is survived by her children Kim (Jose) Nelson, De Pere; Willie (Susan) Nelson, New London, 5 grandchildren Aeva, Luis, Miguel, Briella and Evelyn, four sisters and one brother-in-law Patty (Jim) Mackenzie, Sharon Konitzer (Mike); Debbie Zoeller (Wil), Kathy Hendricks, two brothers and one sister-in-law David Hendricks (Mary); Gary (Rosie) Hendricks, a special friend Lee. She is further survived by nieces, nephews other relatives and friends. She was preceded in death by one brother Billy Hendricks. Gathering of family and friends will be held from 9:00 A.M. to 11:00 A.M. on Monday, November 27, 2017 at Saint Jude Catholic Church 1420 Division Street. A Mass of Christian Burial will be held at 11:00 A.M. Burial at Fort Howard Cemetery. In lieu of flowers a memorial fund has been established in her name. The family would like to offer a warm note of appreciation to the Cancer Team at Bellin Health, Unity Hospice and Rennes Nursing Home for all of their loving care and concern shown to LouAnn~ your kindness will never be forgotten.

LouAnn Hendricks, 63, Green Bay passed away on Saturday, November 18, 2017, with her family by her side. LouAnn was born on April 28, 1954 in Green Bay the daughter of the now late Norbert and Regina (Bartkowiak) Hendricks. LouAnn was a graduate... View Obituary & Service Information

The family of Mrs. LouAnn Hendricks created this Life Tributes page to make it easy to share your memories.

Send flowers to the Hendricks family.