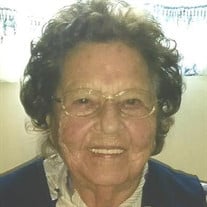 Lorraine F. Bomski (Kush), 91, a resident of Poland, WI, passed away on Friday, December 23, 2016. Lorraine was born on March 9, 1925 in Green Bay the daughter of the now late Walter and Josephine Kush. On February 22, 1944 she married the love of her life Robert Bomski Sr. Robert and Lorraine farmed until their retirement and then became Florida Snowbirds for 33 years. They relished in the warmth of the sun to their little piece of paradise that they believed was their land of the fountain of youth. Lorraine made the best apple pie that won 2 blue ribbons at the county fair. Lorraine will be greatly missed by her loving husband Robert of almost 73 years, her 10 children Jeannie (Dan) Kroll, Brussels; Judy (Chuck) Kinjerski, Denmark; Joyce (Ken) Kinjerski, Denmark; Robert Jr. (Cindy) Bomski, Green Bay; Gerald Sr. (Lynn) Bomski, Green Bay; John Bomski, Sr., Green Bay; Jillaine (Chuck) Luczaj, Wausau; James (Marjean) Bomski, Denmark; Joseph Sr. (Dana) Bomski, Green Bay; Jacqueline (Ron) Vanden Bush, Green Bay; along with many grandchildren, great-grandchildren and great-great-grandchildren, a sister Genevieve Lapacz, a brother-in-law Tom Bomski, a sister-in-law Lillian Kush, a sister-in-law and brother-in-law Bill and Darlene Smith. She is further survived by nieces, nephews other relatives and friends. She was preceded in death by a daughter Joanie, a grandson Donnie Kroll, a granddaughter Heather Bomski, a brother Frank Kush, a brother-in-law Ed Lapacz, parents-in-law Stanley and Margaret Bomski, a sister-in-law and brother-in-law Elmer and Deloris Denis. Lorraine was a loving wife, mother, grandma and will be greatly missed and forever hold a special place in our hearts. Gathering of family and friends will be held from 3:00 P.M. to 7:00 P.M. on Monday, January 2, 2017 at All Saints Catholic Church 145 St. Claude Street. A Rosary Service will be held at 7:00 P.M. Visitation will continue after 9:00 A.M. on Tuesday, January 3, 2017 at the church. A Mass of Christian Burial will be held at 11:00 A.M. with Rev. Bill O’Brien officiating. Burial at Cyril & Methodius Catholic Cemetery. In lieu of other expressions of sympathy a Memorial Fund has been established in her name.

The family of Mrs. Lorraine Bomski created this Life Tributes page to make it easy to share your memories.

Send flowers to the Bomski family.