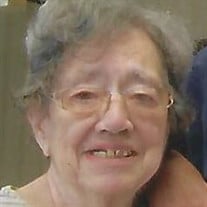 Loretta T. Konitzer, 83, passed away unexpectedly on Saturday, July 21, 2018. Loretta was born on September 29, 1934 in Green Bay, the daughter of the now late Henry & Irene (Heraly) Lewins. On February 11, 1956 she married James “Jim” Konitzer in Green Bay and the couple celebrated 58 years together. James preceded her in death on May 5, 2014. Loretta had worked for many years in a bakery before her and Jim started their family. She was a fulltime homemaker and was devoted to her family and taking care of them. Loretta had a love of life and many interests but was especially fond of her ceramics and made so many beautiful items that the family has as heirlooms today. She had a servants heart and anything that she could do to help~ she was there. Loretta was a loving wife, mother, grandmother and a friend to many and will always be lovingly remembered and sorrowfully missed. Loretta is survived her 5 children Dan Konitzer, Sue (Pete) King, Tom (Sheri) Konitzer, Jerry (Cindy) Konitzer and Joanne (Cal) Janus; eleven grandchildren; six great-grandchildren; one brother Leonard Lewins, 2 sisters Leola Baenen, LaVerne (Jerald) Williquette, three sisters-in-law Retha, Sue and Karen Lewins. She is further survived by nieces, nephews other relatives and friends. She was preceded in death by her husband Jim, two daughters Barbara Gergisch and Linda Konitzer. One sister Lorraine Peer, five brothers Lester, Leland, LeRoy, Larry and Vernon Lewins. Gathering of family and friends will be held from 3:00 P.M. to 6:00 P.M. on Wednesday, July 25, 2018 at St. Peter & Paul Catholic Church 710 N. Baird Street. A Prayer Service will be held at 6:00 P.M. Burial at Nicolet Memorial Gardens. The family would like to offer a warm note of appreciation to the First Responders and the ER Staff at Aurora BayCare for all of their loving support and kindness~ your thoughtfulness meant a great deal.

The family of Mrs. Loretta T. Konitzer created this Life Tributes page to make it easy to share your memories.

Send flowers to the Konitzer family.