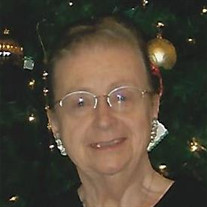 Lorajean (Haumersen) Andrews - known to all as Eljay - died peacefully on the morning of May 4, 2018 in Green Bay. She was born on February 9, 1923 in Racine, Wisconsin, the daughter of Alvin and Ethel (Olle) Haumersen. She graduated from Marquette University in 1944 with a B.S. in Nursing. She married Frank Carroll Andrews in 1946, and he preceded her in death in 2007. Having been born and raised in Racine, Eljay raised her own family there. She worked at St Mary's Hospital, at times in the E.R., and at times in Labor and Delivery. After retiring, she and Frank became “Snow Birds”, traveling to Mercedes, Texas for winters and returning to Racine in the summer, with many visits to “Camp” in northern Wisconsin. Wherever they were, Frank and Eljay made life-long friendships, involving themselves in the community, whether at the churches they attended, or through volunteering. Eljay personified the word feisty. She had an optimism and drive to do right by people that gave her the confidence to speak her mind - to anyone, qualities that served her well while raising money and awareness for the causes she supported. Her children and grandchildren were often treated to her advice to “bloom where you are planted”, instructed that “if you make a mess, you clean a mess”, and admonished that there “ain’t no trouble like Granny trouble!”, lessons her grandchildren are now handing down to their own children. She enjoyed being active, playing tennis well into her 70’s. In 2004 she and Frank moved to the Green Bay area to be closer to family, and she has resided here since then. Eljay is survived by her children, James and Carole Andrews of Green Bay, Jean and Charles Keegan of Missoula, Montana; and Bill and Nancy Andrews of Edina, Minnesota; by her grandchildren, John Andrews and Rene Ryan of Pearland, Texas; Amy and Tom Jones of Santa Fe, Texas; Brian and Amee Andrews of Houston, Texas; Lisa and Joe Quirk of Laredo, Texas; Anne Keegan and Brian Osborne of Cleveland, Ohio; Kate and Daniel O’Connell of Joshua Tree, California and Elizabeth and David Joiner of Murray, Utah. She is also survived by 7 great grandchildren, Lily, Chloe, Kaylee, Braya, William, Calvin, and Emma; and by her dear cousin Beth Cugini of Durango, Colorado. She is further survived by many dear friends, and by 21 foster children, who needed the care a nurse could give them until they were placed in loving homes. In addition to her husband, Eljay was preceded in death by her parents, and by her brother James and sister Doris, both of whom died in infancy. In accordance with Eljay’s wishes private services will be held for the immediate family at a later date. Eljay’s family would especially like to thank the staff at Tender Hearts Assisted Living for their care and concern for her, and for making her part of their family; and Unity Hospice for providing the extra care she needed that allowed her to stay in the home she knew and loved. Eljay was among the first residents at Tender Hearts, and knowing that she was well cared for and loved has been a great comfort to her family.

Lorajean (Haumersen) Andrews - known to all as Eljay - died peacefully on the morning of May 4, 2018 in Green Bay. She was born on February 9, 1923 in Racine, Wisconsin, the daughter of Alvin and Ethel (Olle) Haumersen. She graduated from Marquette... View Obituary & Service Information

The family of Mrs. Lorajean L. Andrews created this Life Tributes page to make it easy to share your memories.

Lorajean (Haumersen) Andrews - known to all as Eljay - died peacefully...

Send flowers to the Andrews family.