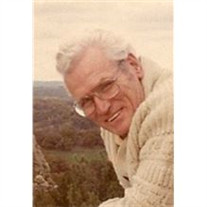 Leslie J. Kane (1920 - 2013) Leslie J. Kane, 93, King, WI, passed away peacefully on Tuesday, July 30, 2013, surrounded by his family. He was born in Chicago, IL on March 20, 1920, son of Leslie and Florence (Barnes) Kane. He married Barbara J. Rabe on September 24, 1955 at Mount Olive Lutheran Church in Suring, WI. Leslie (Leo) was a graduate of Austin High School in Chicago and attended Northwestern University. He served in the U.S. Air Force during WWII from 1942 – 1945, deployed overseas in Great Britain, France, Belgium and the Netherlands. He was by trade a professional painter for the Continental Bank in Chicago, and also proprietor of Kane’s Family Shoe Store in Gillett, WI. Leslie was an avid reader, most notably concerning history, travel and politics. He loved old films, travelling and trains and had a quick Irish wit about him. Conversing with him will truly be missed by many. Leslie is survived by his wife, Barbara, King, WI; daughter, Elizabeth, Paris, France; son, Charles and daughter-in-law, Peggy, Waupaca, WI; brother-in-law, EJ Rabe and his wife BJ Douglass, Lakewood, WI; sister-in-law Marlene (Rabe) Lathrop and her husband James, Jackson, WI; nieces and nephews including Susan Stanescki, West Palm Beach, FL and Nancy Smith, Harvard, IL; great-nieces and nephews, step-grandchildren and great grandchildren. He was preceded in death by his parents, brother Edward and sister-in-law Marion, sister Catherine, and nephews Patrick, Thomas and John. Gathering of family and friends will be held from 10:00 A.M. to 12:00 P.M. (noon) on Tuesday, August 6th 2013 at Trinity Lutheran Church in Maple Valley. A Funeral Service will be held at 12:00 P.M. In honor and recognition of Leslie’s service to his country a Military Funeral Honors Service will take place immediately following the church service, followed by burial at Maple Valley Cemetery. In lieu of flowers, donations may be made to the Parkinson’s Disease Foundation: http://www.pdf.org/.

The family of Leslie Kane created this Life Tributes page to make it easy to share your memories.

Send flowers to the Kane family.