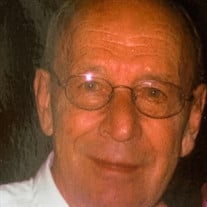 Bellevue: Leo Henry Lukes, 92, (formally of Kewaunee) passed away peacefully in his sleep on Saturday, June 13, 2020 at Sturgeon Bay Health Services. He was born February 29, 1928 in Kewaunee, WI to Adolf and Esther Lukes. Leo served his country in the U.S. Navy from 1946-48. While in the Navy he was assigned to the U.S.S. Aircraft Carrier Philippine Sea that brought Admiral Richard Bryd to Antartica for exploration. After his return, Leo began barbering in Kewaunee with his father, Adolf. He married Ruth (Berg) Lukes in 1950. He had 4 children; Gary, Lynn, Wendy and Kevin. He was a member of the Masonic Lodge and held the Honor of Master of the Kewaunee Lodge in 1957. Leo was a Boy Scout leader, a member of the American Legion, played sports and was an active member of his church for many years. He barbered for 50 years, and always welcomed people who stopped by the shop to "shoot the bull". His son Lynn, the third generation barber, continues the tradition. Survivors include his wife, Ruth of 71 years, one brother Dick (Rita) Albuquerque, NM; one sister, Linda (Jerry) Neumann, Manitowoc; 4 children Gary (Sarah) Lukes, Poynette; Lynn Lukes, Kewaunee; Wendy (fiancé Dave) Lukes, Sturgeon Bay; Kevin (Erika) Lukes, Oneida; 5 grandchildren Christopher Lukes, Amy (Peter) Henry, Jamie (Steve) Fiourucci, Mason Lukes and Caden Lukes and 4 great grandchildren, Mitchell, Holly, Bronwyn, and Elena. He was preceded in death by his parents, daughter Bonnie, brothers Ivan and Roy Lukes. A celebration of life will be held at a later date. Thank you to the staff at Sturgeon Bay Health Services for the care and compassion they have given Leo over the years.

Bellevue: Leo Henry Lukes, 92, (formally of Kewaunee) passed away peacefully in his sleep on Saturday, June 13, 2020 at Sturgeon Bay Health Services. He was born February 29, 1928 in Kewaunee, WI to Adolf and Esther Lukes. Leo served his... View Obituary & Service Information

The family of Mr Leo H. Lukes created this Life Tributes page to make it easy to share your memories.

Send flowers to the Lukes family.