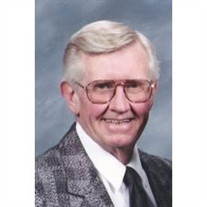 Lawrence “Larry” W. Christensen, 70, Allouez, passed away on Wednesday, August 13, 2008 at home surrounded by his loving family. Larry was born on November 30, 1937 in Green Bay the son of the late Walter and Margaret (Klika) Christensen. He was a graduate of Green Bay East High School with the class of 1956. Larry served his country in the United States Navy from 1956 until his honorable discharge in 1960. It was at the USO where he met the girl of his dreams. On March 9, 1957 Larry married the former Joy Barlow at Urban Methodist Church in Dallas Texas. He and Joy then moved to Green Bay to start raising their family. Larry was employed at Procter and Gamble for over 34 years until his retirement. He was very artistic and created many wonderful paintings that have become family treasures. Larry had a very strong faith in the Lord and instilled Christian values in his family. He was always willing to minister in his church wherever needed. Larry liked spending time outdoors whether he was camping with his family, planting flowers or taking in the beauty as he fished. He liked to watch the Packers, play cribbage, shoot pool and was always interested in a good book. Larry loved his family and cherished spending time with them. He was a loving husband, father, grandfather, and a friend to many. He will be lovingly remembered and sorrowfully missed. Larry is survived by his wife, Joy; two sons and two daughter-in-laws: Mark and Patricia Christensen, Bellevue, Dan Christensen and his wife Joy Hansen-Christensen, Kemp TX; one daughter and son-in-law Laurie and Gerard (Jerry) Hruska, Wausau, WI; 10 grandchildren: Amanda Christensen and her fiance´ Scott Pantzlaff, Dan Christensen and his fiance´ Kimberly Rawlinson, Bethany (Alan) Terry, Jacob and Joshua Christensen, Matthew, Jessica and Christopher Christensen, Stephanie and Luke Hruska; 3 great-grandchildren: Alan Jr. and Alexandria Terry, Veta Christensen, his mother-in-law Louise Barlow, a sister Joyce Sedenquist, one brother-in-law and sister-in-law James and Bobbie Barlow. He is further survived by nieces, nephews other relatives and friends. He was preceded in death by his parents, his father-in-law Ralph Barlow, and a brother-in-law David Sedenquist Gathering of family and friends will be held on Saturday, August 16, 2008 from 10:00 A.M. to 11:00 A.M. at Ascension Lutheran Church ELCA 2911 Libal Street. Funeral Service 11:00 A.M. at the Church with Rev. Luther Swenson officiating. Burial will be at Woodlawn Cemetery, Allouez. In lieu of flowers a Memorial Fund has been established in Larry’s name. The family would like to offer a special thank-you to Dr. Anshu Luthar, the first floor staff at Bellin Memorial Hospital and the staff of Unity Hospice for all of their care, concern and attention shown to Larry. Also, a warm note of appreciation to their church family for all of their loving support and prayers.

The family of Lawrence Christensen created this Life Tributes page to make it easy to share your memories.

Send flowers to the Christensen family.