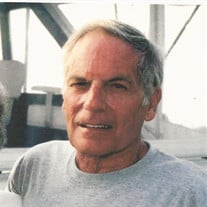 Lawrence M. “Larry” Beyer, age 79, of De Pere, passed away peacefully at his home, Friday, March 27, 2015, surrounded by his loving family, after a long and courageous battle with congestive heart failure and COPD. Larry was born March 3, 1936 in Green Bay to the late Ralph and Evelyn Beyer. After traveling throughout Europe while serving in the Army, Larry married the love of his life, Marian Heraly, October 5, 1957 and they spent 51 loving and devoted years together. Marian preceded him in death, October 25, 2008. Larry started working as a pattern maker and later worked at Fort Howard Paper Mill. It was not until he and his wife started building their home together that Larry was inspired to become an electrician. Larry worked as an electrician at Van Den Heuvel Electric up until his retirement in 1998. He was very proud of his son, Troy, for following in his footsteps as an electrician and enjoyed working along side Troy for close to 10 years. Larry had a passion for discussing politics and enjoyed listening to music, going bowling, puttering in his garage and rooting for the Green Bay Packers. Some of his happiest times were spent up north at his cottage in Crivitz where he enjoyed riding his jet ski, driving the pontoon and spending quality time with his wife and family. He was a selfless, hard-working individual while also a dedicated husband, father and grandfather. Larry also loved animals and held a special place in his heart for all his pets, including his two dogs, bird and fish. Larry is survived by his three children, Rick (Cheryl) Beyer, Green Bay, Troy (Jennifer) Beyer, De Pere and Chad (Joanna) Beyer, Seymour; six grandchildren, Jessica, Ashley, Alex, Kerri, Stephanie and Noah; one great-granddaughter, Julia; a special uncle, George Beyer; good friend, Dave Prust and other family and friends. Larry also leaves behind his loving dog, Molly and a “granddog,” Buddy. He is preceded in death by his wife, Marian; his father, Ralph Beyer; his mother, Evelyn Beyer; a granddaughter, Courtnie Beyer and a grandson, Eric Beyer. Larry’s wish was to be cremated with no funeral service and to be buried next to his parents. Online condolences may be expressed at www.hansenfuneralservice.com. “A special thank you would like to be given to Larry’s son, Chad, to recognize his endless dedication, care and support he provided Larry throughout his lengthy battle with his illness.”

Lawrence M. &#8220;Larry&#8221; Beyer, age 79, of De Pere, passed away peacefully at his home, Friday, March 27, 2015, surrounded by his loving family, after a long and courageous battle with congestive heart failure and COPD. Larry was born... View Obituary & Service Information

The family of Lawrence M. Beyer created this Life Tributes page to make it easy to share your memories.

Send flowers to the Beyer family.