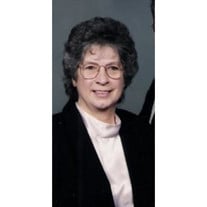 LaVerne “Vernie” Martha (Guns) Delaruelle LaVerne Martha (Guns) Delaruelle, 72, loving wife and most beautiful mother, passed away peacefully at her home on Wednesday, August 27, 2008 after dealing with cancer for 10 years. She was born January 4, 1936, in the town of Bellevue to the late Albert and Henrietta (Van Den Langenberg) Guns. She married the love of her life, Donald L. Delaruelle, of Green Bay at St. Philip Church on June 25, 1955. Vernie was a devoted wife and mother of six. She also lovingly cared for 14 foster babies working through the Green Bay Diocese from 1968-1973. Throughout the years she served as a religious education teacher, 4-H leader, poll worker, and volunteer for the American Cancer Society Quit Smoking Clinic. Vernie was a Eucharistic Minister for over 30 years at S.S. Peter and Paul and brought communion to shut-ins until the cancer progressed. She loved dancing with Dad, playing cards with family and friends, crocheting, praying the rosary, baking, and babysitting, especially for their grandchildren. Vernie was known for the love of her children and grandchildren, and her gentle, unselfish nature. Her legacy of love, faith, and devotion to family is placed deep within our hearts and will be passed down for generations. Survivors include Don, her husband of 53 years; 6 children and their spouses: Debby (Scott) Nejedlo, Cindy (Randy) Kuchta, Lynn (Tom) Fay, Theresa (Kip) Williams, Mary (Rick) Fisher, and Dan (Vicki) Delaruelle, also Rob (Alicia) Charles who always held a special place in her heart; 14 grandchildren: Derek Nejedlo, Ryan and Jenny Kuchta, Kyle and Amanda Fay, Geoff (Katy) Williams, Miranda (Baptiste) Paul, Kara (Ryan) Geenen, Matt, Laura, Tom, and Mike Fisher, Kimberly Delwiche, and Amara Delaruelle; 3 great-grandchildren: Elise and Abbie Williams, Soleil Paul, and more “on the way”; 4 sisters and brothers-in-law: Luella (Wencil) Froelich, Isabel Puyleart, Ursula Puyleart, Carol (Ronald) Brice; 1 brother, sisters-in-law, and brothers-in-law: James (Sally) Guns, Arlene Guns, Marilyn Guns, Joyce (Robert) Boehm, Elaine Johnson, Rita (Harold) VandenAvond; and many nieces and nephews. She was preceded in death by one son, John Albert Delaruelle, who died shortly after birth; 3 brothers and 1 sister-in-law: Raphael, Gordon and Joyce, and Robert Guns; brothers-in-law: Richard Puyleart, Raymond Puyleart, and Don Johnson. Visitation will be held from 4 p.m. to 8 p.m. on Monday, September 1, at S.S. Peter & Paul Church, 710 N. Baird, where a Prayer Service will be held at 7 p.m. Visitation will continue on Tuesday, September 2, at the church from 10:00 a.m. until the Mass of Christian Burial at 11 a.m. with Msgr. Roy Klister officiating. Entombment will be at the Allouez Catholic Mausoleum. The Delaruelle family wishes a heartfelt thank you to all who helped during this time, especially Dr. Gerald Bayer, St. Vincent Hospital, the wonderful doctors at Mayo Clinic, Unity Hospice and their incredible angels of mercy, S.S. Peter & Paul Parish, all of the clergy who have eased the journey, and all of our family and friends whose care and support have been such a comfort. When someone you love becomes a memory, the memory becomes a treasure.

The family of LaVerne Delaruelle created this Life Tributes page to make it easy to share your memories.

Send flowers to the Delaruelle family.