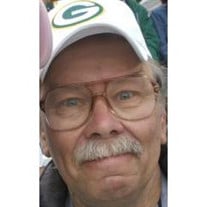 Ken Mikolajczak Survived by loving wife, Mary and beloved daughter, Juli. Also survived by sister, Arlene (Gene) Scholler, Mother-in-law Beatrice McKeough, sisters-in-law Barbara McKeough, Elizabeth (Lee) Garrow, Loretta (Martin) Darby, Clare (Scott) Lundstrom and brother-in-law Mark McKeough (Kim Gianelo), nieces Linda (Kevin) McKenney, Mary Jo (Michael) Kosloski and nephews Eugene Scholler, Jr. (Wendy), Ian and Aidan Lundstrom. Preceded in death by his parents, Michael and Clara Mikolajczak, and father-in-law, Tom McKeough. Ken was born, raised and lived in Milwaukee for 56 years. He graduated from Notre Dame High School, Milwaukee Area Technical College and Marquette University. He maintained close relationships with many Milwaukee residents, most notably Gary Miller (Diane), whom he knew since kindergarten. Ken worked in the insurance industry as a Pricing and Product Analyst, initially with Classified Insurance and Milwaukee Insurance in Milwaukee and, most recently, for Ameriprise Financial in Green Bay. Ken was a passionate bike rider who loved to take long rides and discover multiple ways to get around the city without using freeways, which he hated. He loved music especially the Rolling Stones, George Thorogood, Blues of all kinds, and 60’s rock and roll. He played a mean air guitar and was an accomplished air harmonica player. Ken spent countless hours designing and constructing World War II dioramas which featured the many tanks and vehicles he built from a kit and historically customized. He had a “green thumb” and maintained a large number of indoor plants. After relocating to Green Bay in 2004, Ken became a great supporter of Green Bay sports. He came to really understand football and supported the Packers enthusiastically, attending several Stockholder meetings with Juli and his late father-in-law, Tom McKeough. He attended numerous Bullfrog baseball games, Gamblers hockey and St. Norbert hockey games with Juli and Tom. Ken came to love vacations Up North at the McKeough family cottage on “No Bass Lake” where he was a part of a large “cottage” family of friends and relatives. He loved fishing, spending hours alone on the lake fishing his favorite “secret spots.” He was a great believer in catch and release, primarily because he tired of cleaning his catches. A gathering to celebrate his life will be held at St. John the Evangelist Church on Thursday, November 13, 2008 from 3 until 6. A Mass of Christian Burial will follow at 6. A private committal service will take place on Saturday, November 15. In lieu of flowers, donations are requested to the St. John’s Homeless Shelter. The family wishes to thank the members of Ken’s team at the Cancer Center-Dr. Kelly Lynch, Dr. Douglas Gold, June Peters and all the other nurses and technicians. Special thanks to Dr. Amy James, Helen Wellens Nurse Practitioner and the nurses on the Bellin 4th floor who cared for him during his final days

The family of Kenneth Mikolajczak created this Life Tributes page to make it easy to share your memories.

Send flowers to the Mikolajczak family.