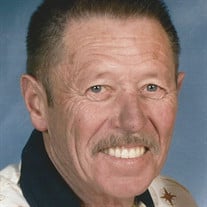 Kenneth “Marty” Martin, 72, Green Bay, died peacefully on Saturday, May 06, 2017 at home surrounded by his family. Ken was born on October 3, 1944 in Chicago, Ill the son of the now late William and Luella (Reynolds) Martin. Ken served his country in the United States Army during the Vietnam War until his honorable discharge in 1970. On April 15, 1972 he married Linda Smith at Grace Lutheran Church and the couple just celebrated their 45th Wedding Anniversary. Ken was a Master Automotive Technician at Van Boxtel Ford for over 30 years and was a through and through “Ford Man”. He loved the outdoors and greatly enjoyed spending time at his cottage in Door County with family and friends. Ken had many passions and interests in life but his greatest joy and what he was most proud of was his family especially his grandsons. He was a loving husband, father, grandfather, a friend to many and will always be lovingly remembered and sorrowfully missed. Kenneth is survived by his loving wife Linda, one son and daughter-in-law Michael and April Martin, one daughter Jennifer Martin, four grandsons Mitchell, Nathan, Zachary and Hayden, two sisters and two brothers-in-law Judith (Al) Kopczynski, Mary (James) VanDeusen, three brothers and three sisters-in law, William (Sue) Martin, Jack (Cindy) Martin, Dean (Mary) Martin, three sisters-in-law and two brothers-in-law Sue (Joe) Van Oss, Bonnie (David) Stonebrook, Sue Smith, two brothers-in-law and two sisters-in-law Richard (Jordis) Smith, Donald (Priscilla) Smith. He is further survived by many nieces, nephews other relatives and friends. He was preceded in death by his parents, his Father-in-law and Mother-in-law James and Yvonne Smith, two brothers-in-law James Smith and Gary Smith. Gathering of family and friends will be held from 3:00 P.M. to 6:00 P.M. on Wednesday, May 10, 2017 at Bethel EV Lutheran Church 1350 Bond Street. A Funeral Service will be held at 6:00 P.M. at the church with Pastor Brian Staude officiating. Burial at Fort Howard Memorial Park. The family would like to offer a warm note of appreciation to the ICU Team at Saint Mary’s Hospital for all of their loving care and compassion. Also, a special thank you to the staffs of Unity Hospice for the dignity and love shown to Ken~ your kindness will never be forgotten.

The family of Mr. Kenneth "Marty" Martin created this Life Tributes page to make it easy to share your memories.

Send flowers to the Martin family.