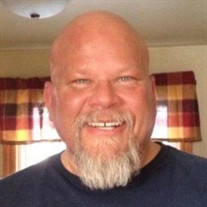 Kenneth M. “Beaver” Greetan, age 54, died unexpectedly of natural causes on March 31, 2020. Ken was born in Green Bay, WI on November 29th, 1965. Ken grew up in Oconto Falls, WI. Shortly after high school he enlisted in the U.S. Navy. Ken served as a Navy Corpsman after graduating Naval Hospital Corps School and served at Naval Hospital Lemoore in California. After the Navy, Ken graduated from NWTC and worked at the Green Bay Correctional Institution. On June 21st, 1995 Ken married the love of his life and best friend, Carrie, at St. Bernard’s Parish in Green Bay. They shared a love of music and enjoyed going to concerts together. In honor of his father-in-law Pokie, Ken was a member of the Knights of Columbus. Ken was also a proud father and grandfather. Later in life Ken suffered from addiction, but he never let his addiction define him. He worked hard to overcome this and help others in their times of need. In January 2020, Ken graduated from Northeast Wisconsin Veterans Treatment Court. Through all of his struggles, Ken was one of the most giving people and treasured his time spent with his family and grandson, whom he loved very much. Ken never said “no” to lending a helping hand and was a volunteer at the VA clinic in Green Bay. He loved campfires, fishing, grilling, the Green Bay Packers, and riding his Harley. Ken will be greatly missed by his wife Carrie and two daughters: Andrea Jurgilanis and husband Sterling, and Christina Hope Greetan and special friend Timothy; one grandson, Nico; his aunt Polly Greetan; his brothers Justin and Jason Greetan; and many other relatives. He was preceded in death by his sister Hope Lynn Greetan, father Maynard Greetan, uncle Roger Greetan, father and mother-in-law Arlyn and Ione Bitters, and one of his best friends and brother-in-law, Tom Bober. Due to the current COVID-10 pandemic, a private funeral service for Ken will be held for the immediate family. A Celebration of his life will be held at a later date when gathering restrictions are lifted. In lieu of flowers a Memorial Fund is being established in his name.

The family of Ken "Beaver" Greetan created this Life Tributes page to make it easy to share your memories.

Send flowers to the Greetan family.