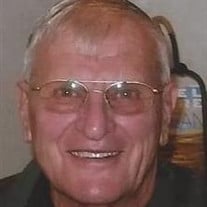 Kenneth “Ken” A. Besaw, 79, Green Bay passed away peacefully on Friday, September 02, 2016 at Angels Touch Assisted Living in De Pere. Ken was born on February 11, 1937 in Green Bay the son of the now late Orville and Louise (Vanden Heuvel) Besaw. He was a graduate of Green Bay East High School with the class of 1956. On April 27, 1963 he married the former Heather Fairbairn at St. Mary of the Angels Catholic Church and the couple enjoyed over 52 years together. Heather preceded him in death on November 21, 2015. Ken served his country in the United States Army serving during the Korean War until his honorable discharge. He joined the Green Police Department and was appointed a Patrolman in 1965 and later as a school Liaison Officer until his retirement in 1992. He liked to travel with Heather and good friends to warm destinations, especially to Mexico. Ken enjoyed weekends at their cabin relaxing with family and friends on the beach, boating and was the unofficial Mayor of Twin Bridge Ski Beach. He was very creative and enjoyed decorating their house and cottage especially during the holiday’s and was always up for a new project. He enjoyed dining out and great times with friends whether it be a good Old Fashioned at Rene’s Dining Room in Crivitz or hosting a Packer Party. Ken had a love for cars and was always looking for his next new ride. He made it a priority to spend time with his family and greatly cherished the times with his grandchildren, whether on vacation or creating fun holiday traditions that they will always remember. Ken is survived by his son and daughter-in-law Jeff (Annette) Besaw, daughter Karie Besaw and her significant other Mark Anderson, 4 grandchildren Miranda, Haley, Ian and Zackery, one sister Judy Van Pay , one brother-in-law and two sisters-in-law Bill (Lea) Fairbairn, Charlotte Fairbairn. He is further survived by many nieces, nephews other relatives and friends. He was preceded in death by one sister Laverne Wilinski and one brother-in-law Bruce Fairbairn. A Celebration of his life will be held from 3:00 P.M. to 6:00 P.M. on Friday, September 9, 2016 at the Swan Club 875 Heritage Road, De Pere. A Time of Reflection will be held 6:00 P.M. followed by a Military Honor Service in dedication to his Country. In lieu of other expressions of sympathy Memorial Donations may be made to: Old Glory Honor Flight P.O.Box 482 Menasha WI 54952. The family would like to offer a warm note of appreciation to the caring staff of Angels Touch for all of their care and compassion.

The family of Mr. Ken A. Besaw created this Life Tributes page to make it easy to share your memories.

Send flowers to the Besaw family.