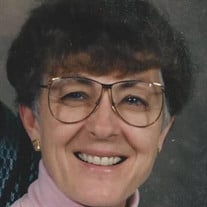 On Wednesday, October 19, 2016, surrounded by family, Katherine Lorraine Bechle, age 87 was called home to be greeted by the God she so loved . She was born on September 4th, 1929 in St. Nazianz, WI to the late William and Loretta (Schnettler) Christel. She was a graduate of Kiel High School class of 1947 and St. Mary’s School of Nursing Class of 1950. On September 27, 1950 she married her high school sweetheart, Jerome “Specs” Bechle. Together they celebrated 51 years of marriage. Lorraine enjoyed a long career in nursing and touched the lives of many before retiring from St. Vincent Hospital, Green Bay, in 1992 to fulfill a dream with Specs to build a home on the land she was raised on. They spent 10 wonderful years there on “the Land” before death separated them. Jerome left on July 19, 2002 to begin preparing a new home for his bride. Lorraine was a member of St. John the Evangelist Church, Green Bay. She loved her family and cherished her time with them. She enjoyed bowling, bridge, golfing, gardening and the company of friends. Her legacy of love lives on in the hearts and voices of those who called her Mom and Grandma. Surviving her are: Tom (Nancy) Bechle and their children, Jayson and Melissa (Dennis) Mary Bechle and her children, Nathan (Dominique) and Matthew (Grace) Meg (Ron) Renquin and their children, Aaron (Jennifer), Justin (Michelle) and Gerad Geri (Tom) Moore, Jr. and their children, Jeremy (Ashley) and Rochelle (Jordan) Jon (Sharon) Bechle and their children, Adam (Colleen) and Lauren David deceased (Sharie) Bechle and their children Ben (Ben) and Crystal Laura (Chris) Grover and children Eric (Stephanie), Josh (Crystal) Erin (CJ), Amy (Adam), and Beth (Corey) Lisa (Paul) Dziengeleski and children Andrea (Garrett), Jesse, Emma and Mara Joe (Ann) Bechle and their children Alicia, Aundra and Trae She is additionally survived by 21 great-grandchildren and her siblings, Joann (Melvin) Mueller, Ronald (Janet) Christel and Carol Leschke. She was preceded home by her sons John David and David Lee, her brothers Rev. Father David Christel, Richard Christel and sister, Laverne “Chris” Hunter Friends and family may call on Sunday, October 23, 2016 from 2:00 - 5:00 p.m. at St. John the Evangelist church, 413 St. John Street, Green Bay with Parish Wake Service at 5:00 p.m. Visitation will continue Monday, from 9:30 a.m. until the time of service. Mass of Christian Burial will take place at St. John the Evangelist Catholic Church at 11:00 a.m. with Fr. Joseph Dorner presiding. A memorial fund has been established in her name. The health profession is filled with many who go beyond the call, people who bring the elements of love, compassion and dignity with them and extend it to their patients and families. On behalf of Lorraine, who would have told you herself if she could, the family would like to say “Thank You” to some very special staff at Wyndemere for making Moms final journey as comfortable as possible. Special thanks to Dr. Patricia Neuman , Brenda and Kathy from Unity Hospice as you helped Mom and our family through the last years. God has a special Heaven for caregivers. Your compassion and dedication will never be forgotten.

On Wednesday, October 19, 2016, surrounded by family, Katherine Lorraine Bechle, age 87 was called home to be greeted by the God she so loved . She was born on September 4th, 1929 in St. Nazianz, WI to the late William and Loretta (Schnettler)... View Obituary & Service Information

The family of K. Lorraine Bechle created this Life Tributes page to make it easy to share your memories.

Send flowers to the Bechle family.