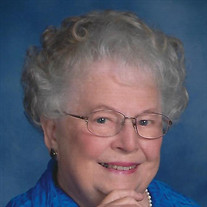 Justina “Jessie” Zunker, 91, joined her beloved husband Leonard, at the Heavenly Gates with the jovial sounds of Polka music on Friday, September 6, 2019. Jessie was born on April 1, 1928 in Sheboygan, the 3rd of 4 children to the late Jacob and Margaret (Schutte) Chopich. She spent her childhood in Sheboygan and graduated from Central High School with the class of 1946. Jessie was employed at Hand Knit Hosiery prior to moving to Green Bay. She married Leonard “Len” after he returned home from serving his country on August 28, 1954 at SS Cyril & Methodius Catholic Church. They had settled in Green Bay and were Blessed with 3 children Kathy, Dorothy and David. Len preceded her in death on March 6, 1987. Jessie was so very proud of her Slovenian Heritage and was able to fluently speak it as well as she belonged to the Slovenian Women’s Union. She was a charter member of Nativity Catholic Church and was a very faith filled person as she and Len instilled these values into her family. Jesse had many accomplishments in life, but was most proud of the fact, that back in school, she memorized the Gettysburg Address and performed it for her family and friends, even as recent as last week. Jessie was a giving person and regularly volunteered at her church along with the Altrusa House. She was a devoted wife, mother, grandmother and a friend to many and will always be lovingly remembered and sorrowfully missed. Jessie is survived by her 3 children: Kathy (Neil) Rechsteiner, Allouez; Dorothy (Tony) Brice, Bellevue; David (Debbie) Zunker, Hollandtown; 7 grandchildren, 8 great-grandchildren, 1 brother-in-law: Norman Berg. She is further survived by nieces, nephews other relatives and friends. She was preceded in death by 2 brothers and 1 sister-in-law: John (Delores) Chopich, Edward Chopich, 1 sister: Francis Berg, father-in-law and mother-in-law: Otto (Dorothy) Zunker, 1 sister-in-law: Dolores “Jane” Zunker. Gathering of family and friends will be held from 9:00 A.M. to 11:00 A.M. on Tuesday, September 10, 2019 at Resurrection Catholic Church, 333 Hilltop Drive. A Mass of Christian Burial will be held at 11:00 A.M. with the Rev. Tom Reynebeau officiating. Burial at Allouez Catholic Cemetery. The family would like to offer a warm note of appreciation to the staffs of Unity Hospice for all of their loving care and concern shown to Jessie~ your kindness will never be forgotten.

The family of Mrs. Justina "Jessie" Zunker created this Life Tributes page to make it easy to share your memories.

Send flowers to the Zunker family.