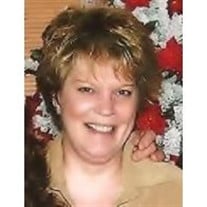 Judith Ann Hummel, 61, died Wednesday, August 15, 2012. Judy was diagnosed three months prior to her death with metastatic cancer that spread to her spine. She was born in Green Bay, Wisconsin on October 17, 1950 to the late William and Beatrice (Kaster) Fay. Judy graduated from Preble High School in 1968 and received her Bachelor of Science degree from the University of Wisconsin Green Bay. She enjoyed a fulfilling career in the telecommunications industry and was most recently employed part-time at Kwik Trip. Judy loved the outdoors and had a passion for gardening. She was especially expressive in the flower gardens around her home, often admired by neighbors, friends and passers-by. Spending time creating picturesque scenes was a favorite pastime. Judy had a commitment to her family and neighbors, lending a hand whenever she could. She also held a special place in her heart for her nieces, nephews and most especially her great niece, Bella Rose Fay, whom she adored. Survivors include four brothers Richard (Wendy) Fay, Joe Fay, Steve Fay and Tom (Lynn) Fay, three nephews, Zachary, Jesse, and Kyle, six nieces Keri, Amanda, Rita, Katie, Jennifer, and Nicki, her great niece Bella and great nephew Jacob, as well as many cousins. A Memorial Service will be held on Monday, August 20, 2012 at 3:30 P.M. at Prince of Peace Catholic Community 3425 Willow Road with Rev. Dan Viertel officiating. There will be a visitation and a time of fellowship immediately following the Memorial Service from 4:00 P.M. to 7:00 P.M. in the gathering of area. The family would like to express a special thank you to the nurses and staff of Unity Hospice. Their care and compassion has not gone unnoticed.

Judith Ann Hummel, 61, died Wednesday, August 15, 2012. Judy was diagnosed three months prior to her death with metastatic cancer that spread to her spine. She was born in Green Bay, Wisconsin on October 17, 1950 to the late William and Beatrice... View Obituary & Service Information

The family of Judith Hummel created this Life Tributes page to make it easy to share your memories.

Send flowers to the Hummel family.