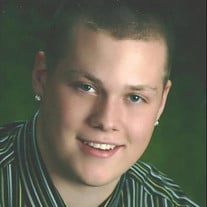 Joseph Thompson Derge, 24, was suddenly taken from all who loved him on the morning of Friday April 14th, 2017, in Green Bay, Wisconsin. Joe has been described again and again by those who knew him as kind and big-hearted, with an infectious smile that lit up any room. Everyone he met remembered him fondly and spoke highly of him. He left us far too soon, with so much left to do. He was born July 27, 1992, in Manitowoc, Wisconsin, the son of Ann T. and Randy A. Derge. Joe was a boisterous, spirited child, so full of life. He enjoyed playing sports including soccer, baseball as a Catbird, and football for the St. Phillip’s Falcons and Preble Hornets. He attended McAuliffe Elementary, Edison Middle, and Preble High Schools. A highlight of his secondary school career was a well-intended video project, whose premier on YouTube gained some notoriety amongst local media for it’s unique and satirical look at immigration, through the eyes of teenagers. After graduating from high school in 2010, Joe held several jobs in various positions; from delivery driving, to bundling steel in a factory. Regardless of the job, Joe was well liked and respected by his co-workers, with whom he made fast friends. He was also recognized often for his work ethic and ability on the job. Joe was an avid Packers fan, attending and watching games with friends and family. He also enjoyed a variety of outdoor activities including fishing, hunting, and boating, especially while staying at the family cabin near Frankfort, MI. Joe often seemed at his happiest there, fishing, swimming, climbing the bluff, and spending hours at the property of special family friends. It was a place he described, on at least one occasion as “magical.” Michigan was Joe at his best and we will never forget the bright, strong, energetic boy so vividly on display there. Joe is survived by his parents, Ann and Randy Derge; his grandmother, Delores Derge of West Bend; sister Ellen Derge (Michael Tomaloff) of Cottage Grove; brother Carlin Derge of Green Bay; as well as many uncles, aunts, cousins, and friends; and the family dog, Cooper. He was preceded in death by his grandfather Willard Derge (2017); grandparents Robert Thompson (2003) and Mary Thompson (2013); and cousin Ben Derge (2006), with whom Joe was especially close. Gathering of family and friends will be held from 1:00 P.M. to 3:00 P.M. on Saturday April 22, 2017 in the Moravian Church at Heritage Hills State Historical Park, Allouez. A Memorial Service will be held at 3:00 P.M. with Rev. Jim Coakley officiating. In lieu of flowers, memorial donations may be sent to: DarJune Recovery Support Services and Café, 1301 S. Broadway, Green Bay, WI 54304; Muscular Dystrophy Association (MDA) Muscle Walk 2017, Carlin Derge’s Team “Hell on Wheels,” 2625 Development Dr., Green Bay, WI 54311; and Grand Traverse Regional Land Conservancy, 3860 N. Long Lake Rd. #D, Traverse City, MI 49684. The family would like to thank the First Responders. We will always love Joe, and he will forever be in our hearts.

Joseph Thompson Derge, 24, was suddenly taken from all who loved him on the morning of Friday April 14th, 2017, in Green Bay, Wisconsin. Joe has been described again and again by those who knew him as kind and big-hearted, with an infectious... View Obituary & Service Information

The family of Mr. Joseph 'Joe" Thompson Derge created this Life Tributes page to make it easy to share your memories.

Joseph Thompson Derge, 24, was suddenly taken from all who loved...

Send flowers to the Derge family.