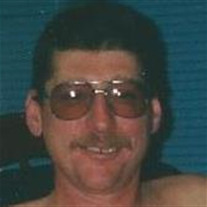 A collector of “treasures” A giver to those in need Joseph (Joe) Blahnik, 62, Algoma was welcomed into eternal life by his parents: Anthony and Lois Blahnik, his sister and brother-¬in¬-law Mary Jo and Tony Laurent, his grandson Myles Joseph, his beloved parrot, Taco, and many other beloved friends and relatives, on August 27, 2016. Joe was born a wild child on December 24, 1953 in Algoma. A truly unique individual with a free spirit, Joe never intended to arrive at his grave in a well preserved body. He would rather skid in sideways, with a Budweiser in one hand and a doobie in the other, body all banged up with missing parts, hollering "That was one hell of a ride!" Although wild in his ways, Joe always believed in taking care of people and treating everyone as he would want to be treated. He touched many lives and will be truly missed by all who knew him. He left behind a whole lot of stuff to his daughters; Amanda Blahnik (Algoma), Ashley Blahnik and her special friend Andrew Jurczykowski (Luxemburg), son and daughter-¬in--law Anthony and Hannah "Mildred" Blahnik (Halesworth, England). We have no idea what to do with it, so if you're looking for some really cool old stuff (we think) and thousands of tools, hardware and other miscellaneous items (some of which we aren't sure what they're used for), you should wait the appropriate amount of time and get in touch. Papa Joe will be fondly remembered by his grand daughters; Alana for singing, dancing, birthday phone calls, bike and GATOR rides, Lexi “Tilly”for drawing, playing dolls, building forts, cooking, and having tea parties, Lilly “Milly”for flying kites, playing nurse, dancing and snacks! Joe is further remembered by; the mother of his children and special friend, DeDe Blahnik (Algoma). His five siblings Sandra Blahnik (NewFranken), Kay (Adrian) Schmidt (Maplewood), Toni Sue (Randy) Massart (Forestville), Tom Blahnik (Algoma) and Becky (Bill) Hann (Fort Atkinson), many nieces, nephews, and very special friends. Please join in celebrating Joe’s life on September 10, 2016 at “The Farm” E6024 County Road S, Algoma, WI 54201 from 3pm-7pm a legendary “pit party” will follow (weather permitting). In lieu of flowers and other expressions of sympathy the family wishes to carry on Joe's legacy of giving to others by suggesting donations be given to Unity Hospice or Algoma Long Term Care in Joe's memory. The family wishes to thank Unity Hospice and the staff at ALTCU for the wonderful care they provided to our Dad during his final days, Algoma Fire and Rescue, Hansen Family Funeral & Cremation Services and the many friends and family members that have helped us through this difficult time. As Joe would say, "This too, shall pass"

A collector of &#8220;treasures&#8221; A giver to those in need Joseph (Joe) Blahnik, 62, Algoma was welcomed into eternal life by his parents: Anthony and Lois Blahnik, his sister and brother-¬in¬-law Mary Jo and Tony Laurent, his grandson... View Obituary & Service Information

The family of Mr. Joseph "Joe" Blahnik created this Life Tributes page to make it easy to share your memories.

A collector of “treasures”
A giver to those in need

Send flowers to the Blahnik family.