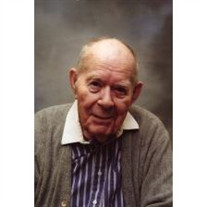 John L. Poirier John L. Poirier, 91, 1229 South Jackson Street, Green Bay, passed away on Veterans’ Day, Sunday, November 11, 2007, at a local nursing home. He was born on December 17, 1915, in Oconto, Wisconsin to John and Mary ( Donlevy ) Poirier. After graduating from Oconto High School, John worked in the local post office, and then as a postal clerk for the Chicago & Northwestern Railroad. Shortly after the outbreak of World War II he enlisted in the Army Air Corps and served with distinction in North Africa and Italy as a B-17 crew member flying missions into Germany. At the conclusion of the war he married the former Margaret Bastian. After a short period of civilian employment, he joined the newly formed United States Air Force and served in a series of assignments of increasing responsibility. He was promoted to Chief Master Sergeant, the highest attainable enlisted rank, in 1963. He retired from the Air Force in 1973, moved to Rogers, Arkansas, and made his home in Northwest Arkansas until 1999. He moved to Green Bay that fall and resided there for the rest of his life. John was a wonderful husband and father and a true gentleman to everyone he met. Those who had the pleasure of knowing him are left to mourn his passing and to celebrate his life. John is survived by a sister, Ruth, Las Vegas, Nevada; a son and daughter-in-law, Michael and Lynette, Oak Park, Illinois; a granddaughter, Jennifer, Berkeley, California; and a grandson, Robert, Vancouver, B.C. He was preceded in death by his parents and his wife, Margaret. A Private gathering was held for the immediate family at Hansen’s Serenity House. A Public gathering for family and friends will be held on Thursday, November 15, 2007 from 4:00 P.M. to 7:00 P.M. at Sisco Funeral Chapels in Springdale, Arkansas. A Mass of Christian Burial will be held at 10:00 A.M. on Friday, November 16, 2007 at St. Raphael Catholic Church 1601 West Sunset Ave., Springdale, Arkansas. Burial will be at Fayetteville National Cemetery with Full Military Honors. The family would like to thank the nurses and staff at the Odd Fellow nursing home for the wonderful care they provided John during the last three years of his life.

The family of John Poirier created this Life Tributes page to make it easy to share your memories.

Send flowers to the Poirier family.