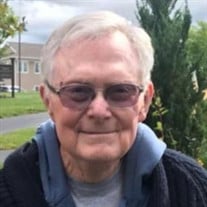 John A. Basche, Jr, 85, De Pere, formerly of Allouez, passed away on Sunday, September 26, 2021. John was born on April 9, 1936 in Green Bay, the son of the now late John & Josephine (Louis) Basche, Sr. He was a graduate of Central Catholic High School, with the class of 1954. On October 18, 1958 he married the former Carol Allen at St. Francis Xavier Cathedral. John was employed at Paper Converting as a machine designer for several years and then joined the team at Voith Paper Inc. until his retirement. A lifelong handyman, John was always working on a home improvement project for his house or those of his family. He was very active throughout his life, and enjoyed biking and walking with his friends at the Kroc Center. In 2003, he helped build a house with Habitat For Humanity along with others from Resurrection Catholic Church, where he was active as an usher and member of the Knights of Columbus. John is survived by his loving wife of 62 years, Carol; his children Dr. Michele Basche (Kimberley Waldron), Scott (Gina) Basche, his grandchildren: Sarah Basche and her fiance Eric, Ethan Basche, Sophia Basche, Anna and Max Waldron, two sisters: Jane Basche, Mary Klapper, one brother and sister-in-law: Robert (Carolyn) Basche. He is further survived by nieces, nephews, other relatives and friends. He was preceded in death by one son: Stephen Basche, his parents, one brother-in-law: Vern Clapper. Gathering of family and friends will be held from 9:30 A.M. to 11:00 A.M. on Friday, October 8, 2021 at Resurrection Catholic Church, 333 Hilltop Drive, Allouez. A Mass of Christian Burial will be held at 11:00 A.M. at the church with Rev. Tom Reynebeau officiating. Burial at Allouez Catholic Cemetery. The family would like to offer a warm note of appreciation to the staffs of Unity Hospice for all your wonderful care and compassion~ your kindness will never be forgotten.

John A. Basche, Jr, 85, De Pere, formerly of Allouez, passed away on Sunday, September 26, 2021. John was born on April 9, 1936 in Green Bay, the son of the now late John & Josephine (Louis) Basche, Sr. He was a graduate of Central Catholic... View Obituary & Service Information

The family of Mr. John A. Basche Jr. created this Life Tributes page to make it easy to share your memories.

Send flowers to the Basche family.