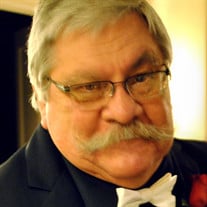 Jerome "Jerry" B. Swanson, age 76, passed away early in the morning on July 31, 2018 after a brief battle with cancer. Born September 21, 1941 in Chicago, IL to Mildred (Kumpula) and John Swanson he resided in Green Bay, WI with his wife Connie. Jerry spent his childhood back-and-forth between Chicago and his beloved Sebeka, Minnesota. He would tell stories about spending time on his mother’s family’s farm and speaking Finnish when he was younger. His favorite spot was when he was fishing along the Crowing River. He attended Lutheran school in Chicago and after high school was drafted into the U.S. Army. He spent time in Germany during the Vietnam War, learning to drive tanks and speak the German language. In the early 1980s he met coworker, Connie, at Fluor Daniels in Chicago and eventually talked her into a date. They were married in September of 1982 and they had just celebrated their 35th wedding anniversary in combination with Jerry’s 76th birthday in Las Vegas this past fall. Jerry was a long time employee at the Kewaunee Nuclear Plant where he made many close friends and was happy to get up early to go to work each day as it meant being home when his girls got home from school each day. Jerry was an avid Chicago Bear and Cubs fan and fought with his Wisconsin friends vehemently about the best teams. He loved travel and photography and got a great fill of both when he visited Japan in 2005. He’d encourage anyone he knew to not be afraid to travel and see the world, and to make sure to tell him all about it when they got back. He was a person who found friends easily, full of Swedish humor, and a gourmand, music, art and book lover. In his last years he loved to spend time with his grandchildren and see them grow, attending swim lessons, birthday parties, and special events in their lives. He will be missed greatly by all who knew him, but they will all take heart knowing he’s free from the pain of this world and telling jokes with passed loved ones in heaven. He is survived by his wife Connie, daughter Hillary (Andy) Krahn, daughter Hannah (and special friend Paul Heath), grandsons Charlie Krahn, August Krahn, granddaughters Henley Starksen, Grace Krahn, Sister Judith Schmitt (special friend Bruce Brunshwiler), Sister Ida (Don) Snyder, Brother Thomas (Jo-Ellyn) Swanson, Brother-in-law William (Betty) Roseberry, nieces Kristy McCullah & Kirsten Roseberry, nephews Eric Schmitt, Benjamin (Kirsten) Snyder, and Christopher Snyder Preceded in death by parents Mildred & John Swanson, in-laws Charles & Flora Terrell, niece Jennifer, and nephew Kurtis. Family and friends may visit at Zion Lutheran Church, 8378 County Road W, Greenleaf (Wayside) beginning at 9:00 AM on Saturday, August 11, 2018. A Memorial Service will begin at 11:00 AM with Pastor Austen Welter officiating. Full military honors will follow.

Jerome "Jerry" B. Swanson, age 76, passed away early in the morning on July 31, 2018 after a brief battle with cancer. Born September 21, 1941 in Chicago, IL to Mildred (Kumpula) and John Swanson he resided in Green Bay, WI with his wife Connie.... View Obituary & Service Information

The family of Mr. Jerome Barry Swanson created this Life Tributes page to make it easy to share your memories.

Jerome &quot;Jerry&quot; B. Swanson, age 76, passed away early in the morning...

Send flowers to the Swanson family.