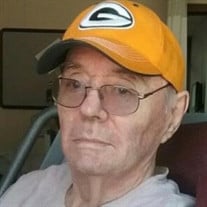 Jerome “Jerry” Dennis Leahy, 93, Green Bay passed away on Wednesday, August 5, 2020 at a local Nursing Home. Jerry was born on October 13, 1926, in Green Bay the son of the now late John and Mary Ellen (Walsh) Leahy. He attended Cathedral Grade School and graduated from East High School with the class of 1946. On August 25, 1951 he married the former Marianne Freix at St. Mary of the Angels Catholic Church. Jerry started his career in 1948 at Northern Paper Mill in the Converting Department as a Machine Operator which later became James River until his retirement in 1989. He was an accomplished athlete and enjoyed playing basketball, softball, baseball and never missed an opportunity to stay active. Jerry loved watching the Packers and was an avid fan. He loved spending time “up north” with his family making memories and greatly enjoyed fishing and smoking a cigar on the porch. Jerry is survived by his wife: Marianne, his children: Linda Ringer, Daniel Leahy, Sharon and Paul Frisque, Colleen Bain, Diane and Gary Greatens, Tim and Kate Leahy, Paul and Diane Leahy, Michelle Crooks and Joe Janquart, Jennifer and Gregg Stary, 25 Grandchildren, 25 great-grandchildren, 1 sister-in-law. He is further survived by many nieces, nephews other relatives and friends. He was preceded in death by 1 daughter: Margaret “Peggy”, 3 sons-in-law: Don Awe, Pat Ringer and Rick Bain, 3 brothers, 5 brothers-in-law and 6 sisters-in-law. Gathering of family and friends will be held from 9:30 A.M. to 11:00 A.M. on Tuesday, August 11, 2020 at St. Francis Xavier Cathedral, 140 S. Monroe Avenue. A Mass of Christian Burial will be held at 11:00 A.M. with Rev. Brian Belongia officiating. . DUE TO THE COVID-19 CONCERNS, THE CHURCH RESPECTFULLY ASKS ALL ATTENDING THE VISITATION to PLEASE BRING AND WEAR A MASK BEFORE ENTERING THE BUILDING AND MAINTAIN SOCIAL DISTANCING AT ALL TIMES. Burial at Allouez Catholic Cemetery. The family would like to offer a special thank you to Unity Hospice, Father Brian and Deacon Tom, for all of your loving care and compassion. In lieu of flowers and other expressions of sympathy the family requests any donations may be made to the: Wisconsin Humane Society Green Bay Campus 1830 Radisson Street Green Bay, WI 54302

The family of Mr. Jerome "Jerry" Dennis Leahy created this Life Tributes page to make it easy to share your memories.

Send flowers to the Leahy family.