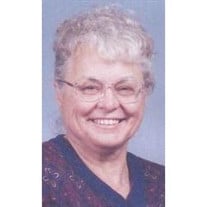 Jean Ann (Ewing) Watts, 81, of Abrams passed from this life to eternal life on Thursday, August 21, 2014 at Sharpe Care in Oconto Falls, WI. Jean was born on March 27, 1933 to Robert J. Ross Ewing and Alice I. (Hanson) Ewing in Madison, MN. She graduated from Madison High School and went on to earn her teaching degree from Mankato State Teachers College. She taught in Renville and Worthington, MN prior to marrying Rodger W. Watts on October 25, 1958 at First Presbyterian Church in Brewster, MN. They first lived and farmed in Rodman, IA, where they began their family. Later they move to Paullina, IA to farm and Jean taught school in Paullina and the surrounding area. In 1970, she became a fulltime homemaker when the family began farming in Storden, MN. It was while they lived in Storden that Jean accepted Jesus Christ as her personal Lord and Savior. She continued to serve Him the rest of her life, always putting her family and others ahead of herself. In 1983, the family moved to Abrams, WI where she lived until moving to Sharpe Care in 2010. In Oconto, Jean resumed her teaching career, first as a substitute teacher in the public schools, then full time at Oconto Christian School until her retirement. Jean was a member of Oconto Gospel Chapel, where she taught Sunday school and attended Bible Studies for many years, as well as a member of the Gideons International Ladies Auxiliary. Jean is survived by her husband of almost 56 years, Rodger, as well as two sons, Brian and his wife Debbie and Blaine and his wife Jean, both of Oconto; three daughters, Melissa Watts and her husband Tim Korsmo, Sarah and her husband Paul Pearson, both of Minneapolis, MN and Dr. Rebecca Watts and her husband Ron Rohrssen, of Troy Mills, IA; 21 grandchildren and 11 great-grandchildren. She is also survived by her twin sister, Joan Wein, of Minneapolis, MN. She was preceded in death by her parents, two grandsons, James Watts and Jonathan Watts and brother-in-law Lowell Wein. Gathering of family and friends will be held from 9:00 A.M. to 11:00 A.M. on Monday, August 25, 2014 at Oconto Gospel Chapel 251 Michigan Avenue, Oconto. A Funeral Service will be held at 11:00 A.M. at the church with Pastor Peter Dorn officiating. Burial will be at Brookside Cemetery. In lieu of flowers, memorial gifts may be made to the Oconto Gospel Chapel or to the Gideons International. The family would like to thank the nurses and staff at Sharpe Care for the wonderful care they provided to Jean during the four years she resided there.

The family of Jean Ann Watts created this Life Tributes page to make it easy to share your memories.

Send flowers to the Watts family.