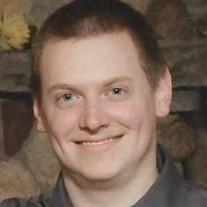 Jason A. Broeckel, 23, Green Bay passed away on Tuesday, January 10, 2017 as a result of an automobile accident. Jason was born on April 26, 1993 in Green Bay the son of Jeff and Amy (Mikkelsen) Broeckel. He was a graduate of Bay Port High School with the class of 2011. He furthered his education at N.W.T.C obtaining his Associate Degree in Electro-Mechanical Technology. Jason was employed as an Inside Sales Associate at Fastenal for over 4 years. He loved to laugh, have fun and truly enjoyed life. Jason greatly enjoyed spending time with his family and friends. He was into fitness and when he wasn’t busy gaming he could be found in his gym running or working out. Jason was the perfect care taker and loved watching over his family and friends but especially his beloved rescue dog Moxxi. He had an immense passion for music which was reflected in his many tattoos. Jason was a genuine person who had a heart of gold and would do anything for anyone~ he will always be lovingly remembered and sorrowfully missed. Jason is survived by his loving parents Jeff and Amy Broeckel, his sister Hayley Broeckel, his brother and sister-in-law Bryan and Kristen Bergelin and their daughter Rylee, a sister Heather Davis, his maternal “Gma” Pat Mikkelsen, his paternal grandma Mary Ann Broeckel. He is further survived by aunts, uncles, cousins other relatives and friends and his loving companion Moxxi. He was preceded in death by his maternal grandpa Jeff Mikkelsen, his paternal grandpa Leo Broeckel, his beloved Aunt Cheri. Gathering of family and friends will be held from 9:00 A.M. to 12:00 P.M. (Noon) on Monday, January 16, 2017 at Calvary Lutheran Church 1301 S. Ridge Road. A Funeral Service will be held at 12:00 P.M. (Noon) with Pastor Earl E. Vorpagel III officiating. In lieu of other expressions of sympathy a Memorial Fund has been established. Although he was taken from us too soon~ the love he had for his family and friends will always remain in our hearts. We love and miss you to the moon and back.

Jason A. Broeckel, 23, Green Bay passed away on Tuesday, January 10, 2017 as a result of an automobile accident. Jason was born on April 26, 1993 in Green Bay the son of Jeff and Amy (Mikkelsen) Broeckel. He was a graduate of Bay Port High... View Obituary & Service Information

The family of Mr. Jason A. Broeckel created this Life Tributes page to make it easy to share your memories.

Jason A. Broeckel, 23, Green Bay passed away on Tuesday, January...

Send flowers to the Broeckel family.