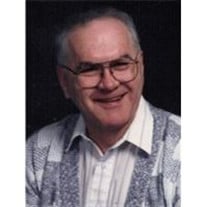 James “Jim” W. Hagerstrom, 78, Green Bay, passed away on Sunday, July 21, 2013 at St. Mary’s Hospital. Jim was born on January 13, 1935 in Milwaukee,WI, he was the adopted son of the late Henrietta (Nash) and Ernest Hagerstrom. On April 27, 1957 he married the love of his life Theda Diebels in Marinette, and the couple enjoyed almost 21 years together. Theda preceded him in death on April 13, 1978. Jim attended Lincoln High School in Wisconsin Rapids. He served his country in the U.S. Air Force as an Accountant. He then held several jobs before retiring from P.H. Glatfecter-Bergstrom Division in Neenah. Jim loved to bowl, golf and was deeply involved with the Allouez Village Band. He was an active and integral member of Nativity of Our Lord Parish as well as a 3rd Degree Knight of Columbus with the Ashwaubenon Council #7498. Jim was a member of the Selective Service Board for eastern Brown County and was a Red Cross Blood Donor. Jim is survived by 5 of his 6 children, Sue (Garth), Kathy (Nancy), Jim Jr. (Mary), Gary (Christine), Jill (Deanna). He also leave behind 12 grandchildren Nick (Megan), Jon (Tanya), Joe (Isla), Lucy, Raquel (John), Jessie (Katie), Nicole (Joey), Peyton, Chris (Cassie), Valerie, Kenzie, Tanner and 10 great-grandchildren. He is also survived by his sister Janet (Emery), sister-in-law Carole (John), brothers-in-law Dick (Nancy) and Steve (Kathi), along with numerous nieces, nephews and a very, very special friend Elaine Stock and special neighbors Tom and Carolyn Nuthals. In addition to his wife, son and parents, he was preceded in death by his mother and father-in-law. Gathering of family and friends will be held from 4:00 P.M. to 7:0 P.M. on Sunday, July 28, 2013 at Nativity of Our Lord Catholic Church 2270 S. Oneida Street. Visitation will continue after 9:30 A.M. on Monday at the Church. A Service of Remembrance will be held at 10:30 A.M. with Rev. Jim Hablewitz officiating. Burial at St. Margaret Cemetery, Neenah. In lieu of other expressions of sympathy a Memorial Fund has been established in his name. The family would to offer a special note of appreciation to the Doctors, Nurses and staff at St. Mary’s Hospital for their support over these past two months.

The family of James Hagerstrom created this Life Tributes page to make it easy to share your memories.

Send flowers to the Hagerstrom family.