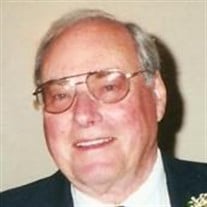 James Bernard Conklin, 91, of Sturgeon Bay, WI and formerly of Park Ridge IL, passed away peacefully in his sleep on December 5, 2015 surrounded by his family. Born on Sept. 17, 1924 in Chicago to Bernard and Katherine (Mehlem) Conklin, he attended St. Juliana and St. Philip Catholic School. A gifted trumpet player, he played the jazz band circuit in Chicago clubs. In 1943 he joined the army to support his family after his father’s death. He was a staff sergeant as a radar mechanic both in the US and the Pacific campaign. After the war, he graduated from Bradley University and majored in accounting. He was a member of the Theta Xi Fraternity. After college, he returned home to Chicago and took a job with Doty &Doty accounting firm auditing large Chicago firms like Motorola. He married Joanne Urban on April 9, 1960 and settled in Park Ridge in 1963 to raise a family. He continued his career with F&F Laboratories, working his way up to becoming Vice President of Finance/Comptroller. He retired in 1988 to Sturgeon Bay WI and wintered in Marco Island FL. He loved his family and friends, celebrating the goodness of life with them. He also loved golfing and boating. He was preceeded in death by his parents, his brother Richard and sisters, Mary Conklin and Barbara Pfeifer. He is survived by his wife, Joanne and children, Beth Bryan (Douglas) grandchildren Spencer and Alexander of Buffalo Grove IL and James of Sturgeon Bay WI. His nieces, Martha Gates (Jeff), Kristina Pfeifer, nephew, Robert Pfeifer and great-nieces and nephew Alexandra, Olivia and Garrett Gates. Gathering of family and friends will be held from 10:00 A.M. to 12:00 P.M. On Monday, December 28, 2015 at St. Peter & Paul Catholic Church 4767 E. Dunn Road Sturgeon Bay. A Funeral Service will be held at 12:00 P.M. with Rev. Robert Stegemann officiating. Burial at Bohemian National Cemetery, Chicago, Ill. Memorials can be made to St. Peter and Paul Catholic Church, 4767 Dunn Rd. Sturgeon Bay WI 54235 or the Salvation Army. .

James Bernard Conklin, 91, of Sturgeon Bay, WI and formerly of Park Ridge IL, passed away peacefully in his sleep on December 5, 2015 surrounded by his family. Born on Sept. 17, 1924 in Chicago to Bernard and Katherine (Mehlem) Conklin, he... View Obituary & Service Information

The family of Mr. James B. Conklin created this Life Tributes page to make it easy to share your memories.

James Bernard Conklin, 91, of Sturgeon Bay, WI and formerly of...

Send flowers to the Conklin family.