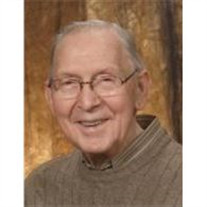 Jack V. Frost, 83, Allouez, passed away at Angel's Touch in De Pere on Friday, October 10, 2014 surrounded by his family. He was born on July 18, 1931 in Coleman, WI to Ernst and Gertrude (Swanson) Frost. Jack was a veteran in the Korea war. He married Carol Frangquist on September 8, 1956 in a candle light ceremony at Trinity Lutheran Church in Green Bay. Jack was in banking and started his career in 1949, with Peoples Trust and Savings Bank, Peoples Bank of Green Bay, Peoples Marine Bank of Green Bay, Bank One Green Bay which is now Chase J.C. Morgan. He retired after 43 years as a Vice President in Commercial Lending. He was a charter member of the Monday Noon Optimist Club and past president of the American Institute of Banking. Jack was an active member of Trinity Lutheran Church and current member of Ascension Lutheran Church in Allouez. He enjoyed the outdoors and the driving trips he took with Carol across the U.S. He, along with his brother-in-law Art, attended the Legendary Ice Bowl, of which the Green Bay Packers won. He enjoyed being involved in his grandchildren's activities. Jack volunteered for the J.C.'s when the first Babe Ruth Baseball League began in Green Bay. He is survived by his wife, Carol; daughter, Sandra Frost; two sons, Daniel (Sue) Frost and Thomas (Kathy) Frost; grandchildren, Kelly, Ryan, Adam (Jen), Anne, Ben and Katie; great grandchildren; Charity, Chase and Aliyah; sister, Eleanor Stoksik, brother-in-law; Lee (Lois) Frangquist, sister-in-laws; Anita (Oliver) Bohning, Dorothy Frost. He was preceded in death by his parents; brother Norman Frost and infant brother Richard, son-in-law; Patrick Turner, brother-in-law Arthur Stoksik. Visitation at Ascension Lutheran Church, 2911 Libal St, Friday, October 17, 2014 from 9 a.m. until 10:45 a.m., with the memorial service at 11 a.m., with the Rev. Lori Swenson, officiating. A private burial will be in the Allouez Chapel Mausoleum. In lieu of flowers, donations can be made to Monday Noon Optimist Club or the Greater Green Bay Community Foundation. The family would like to extend a special thank you to Phil Pfeiffer, Heartland Hospice and the wonderful caring staff at Angel's Touch, even though he was there only 25 days.

Jack V. Frost, 83, Allouez, passed away at Angel's Touch in De Pere on Friday, October 10, 2014 surrounded by his family. He was born on July 18, 1931 in Coleman, WI to Ernst and Gertrude (Swanson) Frost. Jack was a veteran in the Korea war.... View Obituary & Service Information

The family of Jack Frost created this Life Tributes page to make it easy to share your memories.

Send flowers to the Frost family.