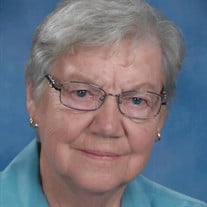 Helen A. Wanish, 90, Green Bay, passed away peacefully, on December 6, 2020 with family by her side. Helen was born on July 19, 1930 in De Pere, the daughter of the now late John and Clara (Meeuwsen) Jaklin. She was a graduate of West De Pere High School with the class of 1948. On February 3, 1951, she married Alex Wanish Jr. at St. Boniface Catholic Church in De Pere and the couple enjoyed over 45 years together. Alex preceded her in death on December 21, 1996. In 1965 Helen and Alex purchased their farm near Denmark, Helen was very proud of her dairy herd, she managed the herd while Alex managed the crops and continued to work away from the farm. It was said that Helen earned her Angel wings managing her husband and bringing up her 4 boys. In 1981 they semi retired and moved to Allouez. Helen had a servant’s heart and always gave of her time and talents. She loved volunteering and she always gave to others to make sure they were taken care of first before herself. She was very gifted and creative when it came to sewing as she faithfully made pillows for heart patients at the hospital along with care bears for patients and her grandchildren. Helen also mended and sewed many a clothes for her family from patching holes to making new outfits . She loved the outdoors and enjoyed spending time in her garden and had a green thumb. In her retirement she loved traveling and always made the most of her adventures away. Helen enjoyed her Packers and Brewers and was always excited to attend the games when she had an opportunity. She was a good cook, but baking was her specialty and was known for her peanut squares as they were requested by her entire family for gatherings. Helen was a loving wife, mother, grandma, great-grandmother, sister, a friend to many and will always be lovingly remembered and sorrowfully missed. Helen is survived by her four sons: John and Dawn Wanish, Medford, Bruce and Lisa Wanish, Green Bay; Bob and Jean Wanish, New Franken; Dale and Jodi Wanish, Suring; 7 Grandchildren: Candice (Tom) Denk, Meghan (Lee) Wibbell, Jordan (Ryan) Holmer, Alex Wanish and his special friend: Kaitlin, Casey Wanish, Travis Wanish and Parker Wanish, 4 great-grandchildren: Quinton Denk, Rory and Aly Wibbell and Leo Wanish, her sisters and brothers-in-law: Marge VanVonderen, Genny “Skip” and Don Burroughs, Martha “Tootie” and Larry De Moulin. She is further survived by nieces, nephews, other relatives and friends. She was also preceded in death by her infant sister: Clara three brothers-in-law and one sister-in-law: Earl VanVonderen, Melvin Bain, Robert and Marion Hettman, and her mother-in-law and father-in-law: Alex Sr. and Emily Wanish. Gathering of family and friends will be held from 9:00 A.M. to 10:30 A.M. on Thursday, December 10, 2020 at Nativity of Our Lord Catholic Church, 2270 South Oneida Street. A Private Mass of Christian Burial will be held at 11:00 A.M. for the immediate family only. Entombment at Allouez Chapel Mausoleum. In lieu of other expressions of sympathy a Memorial Fund has been established in her name.

Helen A. Wanish, 90, Green Bay, passed away peacefully, on December 6, 2020 with family by her side. Helen was born on July 19, 1930 in De Pere, the daughter of the now late John and Clara (Meeuwsen) Jaklin. She was a graduate of West... View Obituary & Service Information

The family of Helen A. Wanish created this Life Tributes page to make it easy to share your memories.

Helen A. Wanish, 90, Green Bay, passed away peacefully, on December...

Send flowers to the Wanish family.