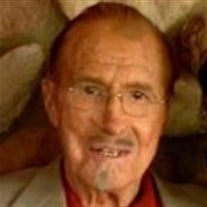 Harold Michael Glickman, 91, of Green Bay, passed away peacefully on December 19, 2014. Harold was born on April 7, 1923 to the late Phillip and Fay "Fannie" Glickman. On February 11, 1950, Harold was united in marriage to the late Margaret Fasco, the love of his life. Harold served his country in the U.S. Army from May, 1943 – July, 1946. Harold went on to New York University and Dr. Wolff Technical School to become a Medical Laboratory Supervisor. He was employed at St. Vincent Hospital, Dr. Shibly, Kulkowski Clinic and Dr. Robert Troup. Harold retired in 1984. Harold is survived by a sister in law, Betty Fasco, of Negaunee, Michigan. Harold is preceded in death by his parents, his beloved wife – Margie, two brothers and two sisters of New York. Harold wanted to thank St. Vincent Hospital’s nurses and doctors, Manor Care East nurses and Unity Hospice for the care he received over the past few months, and especially Dr. John Andrews for saving his life three times. Harold was especially grateful to be surrounded by friends he loved and wanted to give special thanks for the friendship and loving care he received during his illness to Debbie and Tim Carpenter, Karla and Joe Hopp, Bryan and Kerri Bathke, Jim and Elizabeth Joannes, Steve and Diane Klarkowski, Dr. Michael Volk and Drs. Kevin and Amy Roesting. Harold will always be remembered for his upbeat personality, his love of life, and his generosity to everyone he cared about. Harold was an avid tennis player and loved eating out at Mackinaws with friends. He will be truly missed by every life he touched. Visitation will be held from 1:00pm until time of service at 3:00pm on Tuesday, December 23, 2014 in the Chapel at Allouez Catholic Cemetery and Chapel Mausoleum 2121 Riverside Drive, Allouez.

Harold Michael Glickman, 91, of Green Bay, passed away peacefully on December 19, 2014. Harold was born on April 7, 1923 to the late Phillip and Fay "Fannie" Glickman. On February 11, 1950, Harold was united in marriage to the late Margaret... View Obituary & Service Information

The family of Harold Michael Glickman created this Life Tributes page to make it easy to share your memories.

Send flowers to the Glickman family.