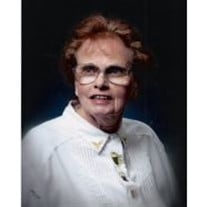 Gloria M. VandenPlas, 75, Green Bay passed away on Thursday, August 21, 2008 at Saint Mary’s Hospital. Gloria was born on August 9, 1933 in Green Bay the daughter of the now late John and Esther (Stuart) Ellis. She graduated from West High School with the class of 1952 but it was not until later that she pursued her college degree. Gloria was a 1990 graduate of U.W.G.B. with a BA in Humanities. On April 2, 1960 she married Norbert H. VandenPlas and the couple enjoyed over 21 years together. Norbert preceded her in death on April 4, 1981. Gloria liked to play bingo never missing the opportunity to play. She was a good cook and especially enjoyed a nice cup of tea. Gloria had many interests but the most important thing to her was her family. She always made sure that they were taken care of even before her own needs. Gloria’s grandchildren were her most prized possession- she would spoil them every chance she got and always made the most of the time together. She was a loving Mom, grandma, sister a friend to many and will be lovingly remembered and sorrowfully missed. Gloria is survived by her children Judy Thyrion, Dale (Darlene) VandenPlas, Bonnie (Bob) Marshall, Gene (Sue) VandenPlas, Dale (Wendy) Lannoye, Ed (Penny) Lannoye, Joe (Patty) VandenPlas, Mary VandenPlas, Jim (Deb) VandenPlas, Candie (Jim) Cork, 35 grandchildren. She is further survived by two sisters Joan Marchant, Patricia Peterson, one brother Lee Ellis, numerous nieces, nephews other relatives and friends. She was preceded in death by 5 sons Tommy Lannoye, Russell Lannoye, David VandenPlas, N. Gary VandenPlas, Randy VandenPlas, one daughter Georgeiana Ryan, and Gloria’s special friend Mike. Gathering of family and friends will be held on Thursday, August 28, 2008 from 3:00 P.M. to 6:00 P.M. at Graceway Fellowship 1750 Dousman Street. Funeral Service 6:00 P.M. at the church with Rev. Rick Schulz officiating. Burial at Holy Martyrs Cemetery. In lieu of flowers a memorial fund has been established in Gloria’s name. The family would like to offer a special thank-you to the staffs of Unity Hospice for all of their loving care and concern.

The family of Gloria VandenPlas created this Life Tributes page to make it easy to share your memories.

Send flowers to the VandenPlas family.