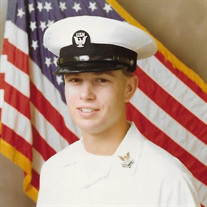 Glenn G. Kollman 63, Green Bay, passed away unexpectedly on Saturday, November 23, 2019. He was born May 24, 1956 to the now late Milton and Lanora (Deschane) Kollman. Glenn graduated from East High-school class of 1974. He enlisted into the U.S. Navy in 1974 and was honorably discharged in 1987, and served on the U.S.S. America and the U.S.S Enterprise where he patrolled many areas including the Red Sea, the Arabian Sea and Indian Ocean. Glenn had an accomplished Military Career serving during the liberation of Libya, and was part of a police detail protecting George W. Bush Sr during one of his trips, as well as receiving many other military accolades. After being honorably discharged in 1987, he continued his faithful service as a Naval reservist and a member of the Army National Guard until his honorable discharge in 1998. He truly loved his country and serving his country ran deep to his core. He had an electrical degree with which he became a lineman and then later a residential and commercial electrician. He also had a degree in technical model building/drafting. He loved wood working and that love was passed down to him from his grandfather and father. He loved to go fishing and could sit on the water and enjoy the peace and quiet of it all day. He had a very special bond and companion with his cat Maythir. Glenn is survived by 4 children: Joseph (Rebecca) Kollman, Sara Kollman, Megan (Brian) Koenig, Christopher Kollman, as well as 4 step children: Kimberly (Brian) Belbot, Ciaron (Devan) Brophy, Riordan Brophy, Lachlan (Jessica) Brophy, 6 grandchildren: Alexis, Hannah, Ariene, Addison, Isabella, and Gavin. 3 step-grandchildren: Lincoln, Connor, Riley. He is further survived by one sister and brother-in-law: Mary (Fred) Strenski, one brother and sister-in-law James (Sheri) Kollman, Maryellen Kollman. He is further survived by nieces, nephews, other relatives and friends. He is preceded in death by one brother: Robert Kollman, a step-grandchild: Aiden Brophy Gathering of family and friends will be held from 10:30 A.M. to 11:00 A.M. on Monday, December 9, 2019 at the Bellevue V.F.W.. 3323 Kewaunee Road. In accordance with Glenn’s wishes Military Funeral Honors will be held at 11:00 A.M. In lieu of flowers and other expressions of sympathy, the family has set up an account in Glenn’s name at Associated Bank

Glenn G. Kollman 63, Green Bay, passed away unexpectedly on Saturday, November 23, 2019. He was born May 24, 1956 to the now late Milton and Lanora (Deschane) Kollman. Glenn graduated from East High-school class of 1974. He enlisted into... View Obituary & Service Information

The family of Mr. Glenn G. Kollman created this Life Tributes page to make it easy to share your memories.

Send flowers to the Kollman family.