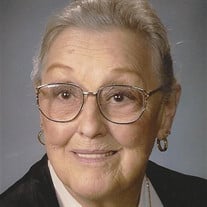 Gertrude “Mrs. D” Delorit, 93, a lifelong resident passed peacefully on Sunday, November 13, 2016 at Anita’s Garden of Grafton. Gert was born on June 27, 1923 in Green Bay, the daughter of the now late Joseph and Florence (Meyer) Meyers. She was a graduate of Green Bay East High School with the class of 1941. On February 9, 1946 she married Robert “Bob” Delorit at SS. Peter & Paul Catholic Church and the couple enjoyed over 59 years together. Bob preceded her in death on September 29, 2005. Gert was a figure skater and performed with her father and then solo. She was an instructor for figure skating program, for the park and recs depart in Green Bay. Gert was so very proud of receiving an invitation to audition for the Ice Capades in New York. She was also an accomplished synchronized swimmer with the Y.M.C.A. In the 1950’s she opened Delorits School of Dance where became known as “Mrs. D” and taught countless students up until she retired in 2012. She had numerous awards for her dance education but her proudest achievement was the Wisconsin Dance Council Lifetime Achievement award in 2005. Gert is survived by 3 sons and 3 daughters-in-law Dennis (Mary Jo) Delorit, David (Cheryl) Delorit, Daniel (Lisa) Delorit; 7 Grandchildren Christopher Delorit, Kim (Todd) Jensen, Jesse (Jody) Delorit, Aaron (Lori) Delorit, Kelly (Todd) Jones, Justin (Megan) Delorit, Elizabeth (Jesus) Maldonado, 5 great-grandchildren Brock, Jenna, John, Josie and Renee, 2 sisters and 1 brother-in-law Carmel, Charlotte (Ken) Ward. She is further survived by many nieces, nephews other relatives, friends and all Delorit Dollies She was preceded in death by 1 brother John Meyers, 1 sister-in-law Helen Meyers and 1 brother-in-law Dick Kosmoski. Gathering of family and friends will be held from 9:00 A.M. to 11:00 A.M. on Friday, November 18, 2016 at Resurrection Catholic Church 333 Hilltop Drive. A Mass of Christian Burial will be held at 11:00 A.M. with Bishop Robert Morneau officiating. Entombment at Shrine of the Good Shepherd Chapel Mausoleum. Please also visit the Gert Delorit Memorial page on Face Book.

The family of Mrs. Gertrude "Mrs. D." L. Delorit created this Life Tributes page to make it easy to share your memories.

Send flowers to the Delorit family.