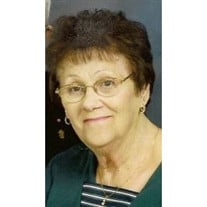 Germaine F. Everard, 78, Sobieski, passed away in her home on Sunday November 13, 2011. She loved Sunday mass, and celebrated the ultimate Sunday Mass with our Lord and Savior . Germaine was born on December 26, 1932 and was 1 of 4 children, all girls, who resided in Green Bay. The daughter of the now late Bernard Moes and Blanche Bitters. She attended St. Joseph Academy High School and worked at Bellin Hospital in the kitchen. She met the love of her life Gerald Everard through a lifelong friend. Gerald and Germaine were married on February 4, 1950 and purchased land in Oneida where they farmed for many years and began their family. Germaine was a devoted wife and mother of 12 children. She worked the farm while her devoted husband was away transporting groceries. Germaine was a life-time member of St. Joseph Church and taught religious education for many years. Children were Germaine’s life-long mission. Germaine loved a good “wild” game of cards and early in her marriage loved bowling. Germaine is survived by her husband Gerald, her children Sharon Wriedt, Shirley (Dan) Due, Cynthia (Mark) Everard-Widen, Karen (John) Fournier, Suellen (Tom) Fournier, Lynette Everard (special friend Steve), Michelle (Mike) Hrubesky, Gay (Dan) Duclon, Kay (Jeff) Koeppel, Jerry (Michelle) Everard, George (Candi) Everard, and Lisa Everard. In addition to her children are 17 grandchildren, 16 great-grandchildren, sisters, Sally (Ted) Everard, Mary Gagnon, 2 sisters-in-law LaVerne Hansen, Joanne Elbe, 2 brothers-in-law and sisters-in-law Ted (Sally) Everard, Rich (Jenny) Everard. Germaine is further survived by many nieces, nephews other relatives and friends. She was preceded in death by 1 son, Wayne, 1 son-in-law Jack Wriedt, her parents Blanche (Lyle) Bitters, Bernard (Louise) Moes, her sister Grace Minnie and her special friend Jack Neuser, brother-in-law Donny Gagnon, 4 sisters-in-law and 6 brothers-in-law Rosie (Mike) Nikodem, Vivian (Leland) Hansen, Frances (Henry) Bukoske, Ervin Lemerond, Elaine (Harold) Sobiek, Ronald Elbe. She was further preceded in death by many other loving relatives and friends. Gathering of family and friends will be held from 9:00 A.M. to 12:00 A.M. on Thursday, November 17, 2011 at St. Joseph Catholic Church 145 St. Joseph Street, Oneida. Mass of Christian Burial will be held at 12:00 P.M. . Immediately following the service a funeral cortege to include Lamers Bus Lines, will accompany Germaine to St. Joseph Catholic Cemetery, Oneida. In lieu of flowers a Memorial Fund has been established in her name. The family would like to offer a special thank-you to Germaine’s Children and her niece Brenda Leonard-Gagnon for all of their loving care shown to her. Also, a warm note of appreciation to Ascera Care especially Amanda, Kim and Debbie, who enabled Germaine to stay at home throughout her illness.

Germaine F. Everard, 78, Sobieski, passed away in her home on Sunday November 13, 2011. She loved Sunday mass, and celebrated the ultimate Sunday Mass with our Lord and Savior . Germaine was born on December 26, 1932 and was 1 of 4 children,... View Obituary & Service Information

The family of Germaine Everard created this Life Tributes page to make it easy to share your memories.

Germaine F. Everard, 78, Sobieski, passed away in her home on...

Send flowers to the Everard family.