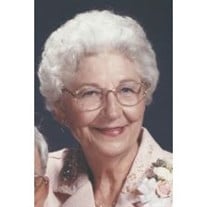 Geraldine “Geri” B. Tilot, 83, of Green Bay was called home to our Heavenly Father with her family by her side on June 23, 2014. Geri was born on March 12, 1931 in the town of Eaton to the now late Anton and Mary (Novitski) Kaminski. On August 9th 1952 she married Charles H. Tilot Jr. at Holy Martyrs of Gorcum Church. Geraldine is survived by her husband of 61 years Charles, her daughter Catherine Tilot & her significant other William Ruben, her son Michael Tilot & his significant other Cathy Heyrman, 3 grandchildren Janette (Jeff) Jorgensen, Alex and Meghan Tilot, 3 great-grandchildren Caleb, Samuel & Madilyn Jorgensen, one sister Dorothy Konwal. She is further survived by many nieces, nephews other relatives and friends. She was preceded in death by an infant son David and an infant daughter Mary. She was also preceded in death by 6 sisters & brothers-in-law Sally (Emil) Vanden Busch, Charlotte(Frank) Morek, Margret (Anton) Glinski, Lorrain (Edward) Buerschinger, Alice (Louis) Musil, Harriet (Charles) Thomas, 2 brothers George Kaminski, Harry (Ann) Kaminski, and brother-in-law Walter Konwal. Geri will always be remembered for her enormous love for her family, her rather ‘large” vegetable garden, her love for playing sheephead, fishing and her talent for crafting. Gathering of family and friends will be held from 9:30 A.M. to 11:00 A.M. on Friday, June 27, 2014 at St. Bernard Catholic Church 2040 Hillside Lane. A Mass of Christian Burial will be held at 11:00 A.M. with Rev. Mark Vander Steeg officiating. Burial at SS Cyril & Methodius Catholic Cemetery, Eaton. In lieu of other expressions of sympathy a Memorial Fund has been established in her name. A Sincere thank-you to the staff at St. Vincent Hospital & Unity Hospice for the wonderful care they gave our wife and mother. Also, a warm note of appreciation to Sr. Caroline for her comforting prayers and support. Thank you for being such a wonderful and terrific wife, mother and grandma~ you will always be lovingly remembered and sorrowfully missed.

The family of Geraldine Tilot created this Life Tributes page to make it easy to share your memories.

Send flowers to the Tilot family.