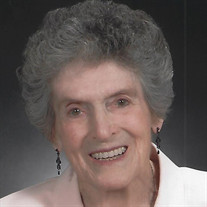 After a long and very full life Mary Geraldine (Gerri) Billings Stewart left this earthly body to join her family and friends in paradise, her heavenly kingdom. She died peacefully at home on June 14, 2020 at the age of 102. She was born March 5, 1918 in Missoula, Montana, the 5th child of Anthony (Tony) and Louise LaChambre Goheen. Her parents divorced when she was two and her mother later married Orlando (Dutch) Vittorie and had two more children. Her stepfather showed Gerri love and kindness as though she was his own daughter. Gerri considered herself fortunate to be raised in a loving, demonstrative family. She attended public schools in Missoula, graduating from Missoula County High School in 1936. On November 30, 1936 she married the boy next door, Barnum J (Barney) Billings, Jr. The newlyweds settled in Missoula where their 2 daughters were born, Mary Brooke in1938 & Barbara Louise in 1944. When the girls were young, she was a homemaker. She was an avid gardener & always had flowers in her home, in fact until her death. As the girls grew older, Gerri worked outside of home and later she kept books for the family business, Billings Petroleum Trucking. Gerri was an energetic supporter of the community and her church. When the girls were younger she served as a Campfire Girls leader. She was an active member of St. Anthony Parish in Missoula & remained so for more than seven decades. She was active in the Altar Society, serving funeral lunches until she was in her 90s. She enjoyed Bible Study groups and other enrichment programs at her church. For several years she was an active member & Officer in the Diocese of Helena (Montana) Council of Catholic Women. She did volunteer work at St Patrick Hospital in Missoula which was a labor of love. Gerri was proud to be a Missoulian and actively supported the arts and community activities. She rarely missed performances at the Missoula Children’s Theater, The Missoula Symphony at the U of M, summer band concerts, and July 4th activities at historic Ft. Missoula. After retiring in 1972, she took up golf & played at the University of Montana course until she was 88. She and Barney were serious bridge players, and Gerri played into her 90s. They enjoyed boating, fishing, gardening and drives in the glorious Rocky Mountains where they lived. With their friends they always were ready for card playing and dancing to Big Band Music and Jazz. After Barney died in January of 1983, friends talked Gerri into joining Friendship Force and she ultimately made 14 trips, traveling to Europe, South America, Asia and Africa. While on the Brazil trip she met Lt. Colonel Robert Stewart, USAF (ret), a widower who had moved back to Montana where he grew up. They married in 1994 and took a memorable honeymoon trip to Italy which was topped off by a private audience with Pope John Paul II in his chapel at the Vatican. She lived independently until she was 97, when she was welcomed into the home of daughter Barbara and son-in-law Paul Biebel, where she was included in their activities in Green Bay. Incidentally, she was a Green Bay Packers fan long before moving to Wisconsin. Gerri was independent and resilient, always happy to be included in parties and gatherings in her “new” home. She had a sense of style and selected her wardrobe carefully right to the end. She enjoyed the reactions of people when they learned her age. It's an understatement that “she aged well”. She always was being asked the secret of her longevity. The answer: “genes” Gerri was predeceased by her parents, her husbands Barney in 1983 and Bob in 1998, her daughter Brooke Billings Leonard in 2009, her siblings Antoinette Goheen Kuhl, Clara Goheen Taylor, Jack & Ted Goheen, & Louie Vittorie, as well as cousins, nephews and many friends. She is survived by her sister Rose Valeria Vittorie Sweetser of Kalispell, MT; her daughter Barbara (Paul) Biebel of Green Bay, WI; grandsons Matthew (Cheryl) Leonard and sons Nathan & Pieter of Idaho Falls, ID; Marcus Leonard (Robin Brown) and son Brendan of Bellingham, WA; Charlie (Angela) Biebel and daughters Sidney, Sophia & Emmy Biebel in Inver Grove Heights, MN; granddaughter Morna Leonard of Hamilton MT, as well as other nieces, nephews, cousins, and many many friends. The family wishes to thank Dr. Jason Hoppe and the remarkable caregivers at Unity Hospice for their many years of keeping Gerri active and able to live a full life. She enjoyed life up until the end and was blessed to leave this world as she wished: peacefully in her sleep and at home. Visitation will be on Thursday, June 25, 2020 at 10:00 at St. Matthew Catholic Church, 130 St. Matthew St. in Allouez. The funeral will follow at 11:00 with Fr. Bob Kabat officiating. Social distancing will be practiced and masks will be available. She will be interned in Hamilton, MT later this year. In lieu of flowers, the family request donations in her memory be made to Unity Hospice, 2366 Oak Ridge Circle, DePere, WI 54115.

After a long and very full life Mary Geraldine (Gerri) Billings Stewart left this earthly body to join her family and friends in paradise, her heavenly kingdom. She died peacefully at home on June 14, 2020 at the age of 102. She was born... View Obituary & Service Information

The family of Mrs. Geraldine Billings Stewart created this Life Tributes page to make it easy to share your memories.