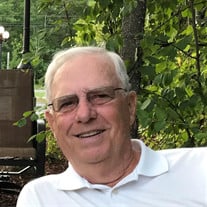 Gerald “Jerry” W. Sears, 78, Green Bay, passed away on Tuesday, July 30, 2019 at the Jack and Engrid Meng Unity Hospice Residence in De Pere after a 10 month battle with brain cancer. Jerry was born in Manitowoc, WI on May 26, 1941 to the late Donald P. Sears, Sr. and Alice (Becker) Sears. Jerry graduated from Sturgeon Bay High School in 1959 and served in the U.S. Army from 1959 to 1962. He married Sharon “Sherry” Mildbrandt on August 17, 1963. Jerry had various occupations, but retired after 30 years at Super Valu Inc. as a warehouseman and semi driver. He loved boating and was a member of the Green Bay Yachting Club for many years. After retirement, Jerry and Sherry moved to Ocala, Fl for 12 years where he enjoyed living on a golf course, having his own golf cart and golfing almost every day. After returning to De Pere he continued to enjoyed golfing until his illness. He was preceded in death by his mother and father, brother, Donald P. Sears, Jr. and sister-in-law Suzie Sears; Also, several aunts and uncles. He is survived by his wife Sherry, children, Dr. Timothy T. Sears (Mary), Thomas S. Sears, Tammy S. Jones (Brian). Grandchildren, Alex, Sam and Rachel Sears, Tori Sears, Sarah and Christopher Jones, 3 step-grandchildren and 8 step-great-grandchildren. Sisters and brothers-in-law, Susan and John Rakow, Sally and Mike Brotcke, and Shelley and Brian Mitrzyk and their children and grandchildren. A Celebration of Jerry’s life will be held from 2:00 P.M. to 5:00 on Saturday, August 10, 2019 at the Rite Place, 1580 Bellevue Street. In lieu of flowers memorial donations may be made to the American Cancer Society. The family wishes to thank the doctors and nurses at Aurora BayCare Neuro 2, especially Jon, Ray and Kathy and the staff at the Vince Lombardi Cancer Center. Also, many thanks to the staff at Unity Hospice, especially, Donna, Phillip, Brenda, Mary, Sally Ann and Barb.

The family of Mr. Gerald "Jerry" W. Sears created this Life Tributes page to make it easy to share your memories.

Send flowers to the Sears family.