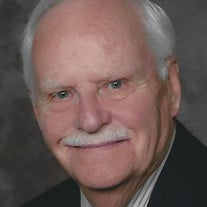 Gerald “Jerry” J. Payette, 79, Allouez, passed away on Thursday, February 28, 2019. Jerry was born on October 30, 1939 in Marinette, WI the son of the now late John and Edna (Prudhomme) Payette. He was a graduate of Our Lady of Lourdes High School in Marinette and attended UW-Madison. Jerry served his country during the Vietnam era in the U.S. Coast Guard as a Radioman until his honorable discharge in 1966. On November 6, 1992, he married the love of his life, Judith Bouche. He was employed at Robinson Metal for many years first as a machine operator and later as a dispatcher until his retirement in 2005. Jerry was an avid armchair coach for the Packers, Badgers and Brewers and was never afraid to use his voice to offer suggestions. He actually liked all kinds of sports and was in a golf league for many years. He was a loving husband, father, grandfather, a friend to so many and always cherished the times spent together. Jerry is survived by his wife Judy, his children; Kelly (Bruce) Adams, Connie (Tom) Diring, John (Kim) Payette, his step- children; Stephanie (John) Eckendorf, Eric (Jeri) Liebergen, 7 grandchildren; Katelyn, Brookelyn, Jackson, Frances, Bennett, Brian, Jacob and Ryan, his in-laws, Virgil Romdenne, Ron (Mae) Bouche, Gary (Sharon) Bouche, Sandy (Randy) Guelette, Ken (Nancy) Bouche. He is further survived by nieces, nephews, other relatives and friends. He was preceded in death by his siblings Mary (Paul) Behnke, Theresa (George) Gressel, Jean (Dick) Kircher, James (Diane) Payette, 1 sister-in-law and brother-in-law Virginia (Pat) Moreau Gathering of family and friends will be held from 9:30 A.M. to 11:30 A.M. on Saturday, March 9, 2019 at Saint Matthew Catholic Church, 130 S. Matthew Street, Allouez. A Mass of Christian Burial will be held at 11:30 A.M. at the church with Rev. Bob Kabat officiating. In lieu of other expressions of sympathy a Memorial Fund has been established in his name.

The family of Mr. Gerald "Jerry" Payette created this Life Tributes page to make it easy to share your memories.

Send flowers to the Payette family.