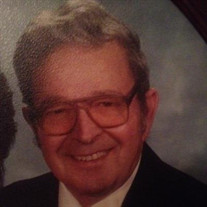 Gerald R. Everard, 87, Sobieski, passed away in his home on Tuesday, January 6, 2015. Gerald was a lifetime member of St. Joseph Church and was a devoted and faithful servant. Gerald was born on June 24, 1927 in Iron Mountain, MI and was 1 of 9 children. The son of the late Theodore and Virginia (Neuns) Everard. Gerald served his country during W.W. II in the United States Army as a small arms mechanic and received the W.W. II Victory Medal. He was honorably discharged in 1948. He worked at S.C. Shannon as a Truck Driver transporting groceries while maintaining a perfect driving and attendance record for over 32 years until his retirement in December of 1989. He met the love of his life Germaine Moes through a lifelong friend. Gerald and Germaine were married on February 4, 1950 and purchased land in Oneida where they farmed for many years and began their family. They enjoyed over 61 years together, Germaine preceded him in death on November 13, 2011. He was a devoted husband and father of 12 children. He loved spending time outdoors and especially the times spent small game hunting, fishing and deer hunting. Gerald and Germaine were avid bowlers in their younger years, they almost always took first place. In his service years, Gerald learned to play the harmonica and was often proud to take it out and play songs for his family and friends. Both he and Germaine loved a “wild” game of cards and a good hand of black jack. Gerald loved to putz and tinker around the house and had a knack for fixing anything he put his hands on. He spent many hours in the woods “picking up sticks” and his motto was to always have a sharp chainsaw. Gerald is survived by his children Sharon Wriedt, Shirley (Dan) Due, Cynthia (Mark) Everard-Widen, Karen (John) Fournier, Suellen (Tom) Fournier, Lynette Everard (special friend Steve), Michelle (Mike) Hrubesky, Gay (Dan) Duclon, Kay (Jeff) Koeppel, Jerry Jr. (Michelle) Everard, George Everard (special friend Angie), and Lisa Everard. In addition to his children there are 17 grandchildren and many great-grandchildren, 2 sisters LaVerne Hansen, Joanne Elbe, 2 brothers and 1 sister-in-law Rich (Jenny) Everard, Ted Everard, 1 sister-in-law Mary Gagnon . Gerald is further survived by nieces, nephews, relatives and friends. He was preceded in death by 1 son, Wayne, 1 son-in-law Jack Wriedt ,his parents Theodore and Virginia Everard, his mother-in-law Blanche (Lyle) Bitters, and father-in-law Bernard (Louise) Moes, 4 sisters and 6 brothers-in-law Rosie (Mike) Nikodem, Vivian (Leland) Hansen, Frances (Henry) Bukoske, Ervin Lemerond, Elaine (Harold) Sobiek, Ronald Elbe, 2 Sisters-in-law Grace Minnie and her special friend Jack Neuser, Sally Everard, brother-in-law Donny Gagnon, He was further preceded in death by many other loving relatives and friends. Gathering of family and friends will be held from 9:00 A.M. to 11:00 A.M. on Saturday, January 10, 2015 at St. Joseph Catholic Church 145 St. Joseph Street, Oneida. A Mass of Christian Burial will be held at 11:00 A.M. with Rev. John Katamba and Deacon Bobby Doxtator officiating. Burial at St. Joseph Catholic Cemetery, Oneida. In lieu of flowers a Memorial Fund has been established in his name. The family would like to offer a special thank-you to Gerald’s family members who enabled him to stay at home throughout his illness. Also, a warm note of appreciation to the staff of AseraCare. Gerald will be lovingly remembered and sorrowfully missed.

Gerald R. Everard, 87, Sobieski, passed away in his home on Tuesday, January 6, 2015. Gerald was a lifetime member of St. Joseph Church and was a devoted and faithful servant. Gerald was born on June 24, 1927 in Iron Mountain, MI and was... View Obituary & Service Information

The family of Gerald R. Everard created this Life Tributes page to make it easy to share your memories.

Gerald R. Everard, 87, Sobieski, passed away in his home on Tuesday,...

Send flowers to the Everard family.