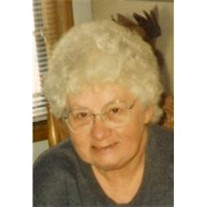 Genevieve Delvaux, 81, Green Bay passed away unexpectedly at her home on Friday, August 30, 2013. Genevieve was born on January 09, 1932 in Bancroft, WI to Leanard and Bertha (Shulfer) Okray. In her earlier years, Genevieve worked as a bartender and line worker at Larsen Canning and Seymour Canning. Genevieve also ran an Adult Family Home for many years caring for several clients whom she thought of as family. Genevieve was one of the most caring individuals providing craft kits to the Vets, feeding the homeless in her home during Christmas, cooking her food to share with families who needed a meal, providing food, clothes and household items to anyone she knew needed help. She always made sure to have her birdfeeders full and treats for the squirrels which she lovingly referred to as "God's Little Creatures" She enjoyed going for rides, especially to the Grottos in Rudolph, WI., making floral arrangements, cooking, baking and bingo. Her biggest enjoyment was spending time with her family and getting many hugs from her great grandchildren. Survivors include one son Michael Delvaux and two daughters Catherine Alty (Gary), FL. and Jane McWey, 13 Grandchildren and 16 Great Grandchildren, Sisters Lea Rowe, Evelyn Garrity and Marie Hilbert. She is further survived by many Nieces and Nephews. Gen was preceded in death by her Daughter Diane Crooks, Sons Brian Keith, Steven and Jeffrey Delvaux, Brother Robert and Sisters Irene Crooks and Lucille Ketterhagen. Gathering of family and friends will be held 9:00 A.M. to 11:00 A.M. on Friday, September 6, 2013 at St. Elizabeth Ann Seton Parish 2771 Oakwood Drive. A Funeral Service will be held at 11:00 A.M. at the church. In lieu of flowers a memorial fund has been established in Gen’s name.

Genevieve Delvaux, 81, Green Bay passed away unexpectedly at her home on Friday, August 30, 2013. Genevieve was born on January 09, 1932 in Bancroft, WI to Leanard and Bertha (Shulfer) Okray. In her earlier years, Genevieve worked as a bartender... View Obituary & Service Information

The family of Genevieve Delvaux created this Life Tributes page to make it easy to share your memories.

Send flowers to the Delvaux family.