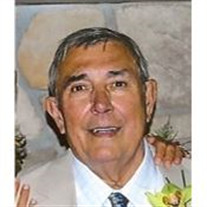 Daniel Garrison Clifford, “Gary” 75, of Green Bay, Wisconsin, passed away peacefully on Saturday, December 28, 2013, at St. Vincent Hospital. Gary was born in Little Falls, Minnesota on August 7, 1938 the son of the now late Byron “Red” Huntington and Emma “Ruth” (Clark) Clifford. He graduated from Brainerd High School in Minnesota with the class of 1957 and was a standout football player for the Warriors. He went on to play football at Brainerd Junior College and later attended the University of Minnesota. On August 13, 1960 he married Patty Jean Kline at St. Francis Catholic Church in Brainerd, MN. Together they raised three beautiful children Denise, Paul and Stephanie, and were extremely proud of them. He had an outstanding 42 year career with the Sherwin-Williams Company and was recognized as a multiple “Circle of Excellence” award winner. He was promoted to District Manager in 1978 and moved his family from Duluth, Minnesota to Green Bay, Wisconsin. Gary managed the Green Bay district for 25 years before retiring in 2003. He was a long time Packer Fan and greatly enjoyed watching the games and tailgating at Lambeau Field. He cherished the many family get-togethers and was always exceedingly generous of his time, loving ways and unconditional support towards his family and friends. Gary was a loving husband, father, grandfather, great-grandfather, a friend to many and will always be lovingly remembered and sorrowfully missed. He is now in Heaven with his beloved wife, who passed away on December 4, 1983. Gary is survived by two daughters and sons-in-law Denise (Russ) Nowak, Green Bay, Stephanie (Shane) McCormick, Green Bay; one son and daughter-in-law Paul (Rosario) Clifford, Oakville, Ontario, Canada; ten grandchildren, Bill (Brianna) Nowak, Drew, Carli and Alli Nowak, Zach, Kasey and Luke McCormick, Jake, Inadia and Paulina Clifford, one great-granddaughter Charlotte, one brother Byron “Babe” Clifford, one sister and brother-in-law Kay (Brian) Johnson, his Uncle Bill Clifford, his special friend and companion Nancy Farr. He is further survived by many nieces, nephews other relatives and friends. Gathering of family and friends will be held from 8:30 A.M. to 10:30 A.M. on Thursday, January 2, 2014 at St. Willebrord Parish 209 S. Adams Street. A Mass of Christian Burial will be held at 10:30 A.M. with Rev. Andrew Cribben O.Praem officiating. Burial at Allouez Catholic Cemetery. In lieu of other expressions of sympathy Memorial Donations may be made to:The Clifford Athletic Scholarship Fund: in c/o Morgan Stanley 111 N. Washington Street, Suite # 410 Green Bay, WI 54301. The family would like to express their sincere gratitude to the staff of nurses and Doctors of St. Vincent Hospital and the staffs of Age Well Centre for all of their loving care and compassion shown to Dad. Also a warm note of appreciation to Nancy Farr for her friendship and love she has shown Dad and our family through the years.

The family of Gary Clifford created this Life Tributes page to make it easy to share your memories.

Send flowers to the Clifford family.