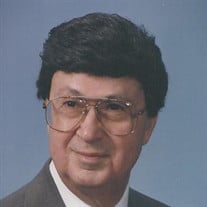 Eugene N. Hruska, 91, Green Bay passed away on Saturday, January 23, 2016 at St. Vincent Hospital. Eugene was born on October 29, 1924 in Montpelier, WI the son of the now late Andrew and Anna (Nemetz) Hruska. He attended Marquette High School in Milwaukee and furthered his education at Fordham University in New York City receiving a degree in Bio-Organic Chemistry and a minor in Philosophy. On June 21, 1952 he married the former Virginia Albers at St. Francis Xavier Cathedral and they had three beautiful children Barbara, Gregory and Dorothy. They enjoyed over 61 years together, Virginia preceded him in death on April 27, 2013. Eugene was employed at Proctor & Gamble as a Chemical Engineer for over 40 years until his retirement. He loved to travel and after his retirement he and Virginia took many trips across the United States including visiting every Catholic Mission. They also travelled extensively abroad. He was a great cook and always enjoyed hosting dinner events. Eugene loved music and was very fond of Opera and Classical Music and had a great knowledge of them. Eugene and Virginia were long time members of St. Mary of the Angels Catholic Church and he was very active in lecturing. Eugene is survived by his children Barbara Maufort, Gregory Hruska, Dorothy Brown, 12 grandchildren, John Paul (Tina), Andrew, Julia, Amelia, Isabella, Tessa, Chasity (Sean), Gavin (Marylu), Garet, Gerard, Geofrey and Angeline, one brother-in-law and sister-in-law James and Muriel Albers. He is further survived by many nieces, nephews other relatives and friends. He was preceded in death an infant son William Gerard, two son-in-laws Thomas Maufort and David Brown, 3 brothers and 3 sisters-in-law James (Marie) Hruska, Joseph (Grace) Hruska, Edward (Juanita) Hruska, 1 sister May Hruska. Gathering of family and friends will be held on Friday, January 29, 2016 from 9:00 A.M. to 11:00 A.M. at St. Mary of the Angels Catholic Church 645 S. Irwin Street. A Funeral Mass will be held at 11:00 A.M. with Father Peter Mitchell officiating. Burial at Allouez Catholic Cemetery. The family would like to offer a special thank-you to the staffs at Odd Fellow Nursing Home~ you became his extended family and he truly loved being at his new “home” Also, a warm note of appreciation to the 7th floor at Saint Vincent Hospital for the end care that you gave to him~ your kindness, compassion and love shown to him will never be forgotten.

The family of Mr. Eugene N. Hruska created this Life Tributes page to make it easy to share your memories.

Send flowers to the Hruska family.