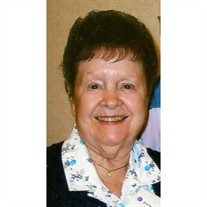 Emily B. Jeffers, 86, Green Bay, passed away on Friday, March 5, 2010 at her home in Brookview Meadows Retirement Community. Emily was born on March 17, 1923 in Arkansas, the daughter of the late Georgia Mae (Law) Logan & William Cecil O’Rear, later adopted by Henry Logan, Toledo, OH, at age one. On October 25, 1942 she married Charles J. Jeffers in Toledo. Charles (Jeff) proceeded her in death on April 13, 2009. Jeff’s job brought them to many areas of the world, including 14 years in Alabama and a 4 year stay in Japan. While Jeff worked in Japan, Emily volunteered her time at an orphanage tutoring the English language to adults and children. Emily had a particular way of doing simple tasks and quite readily shared this with those she cared about. They retired in California but later returned to Alabama to be closer to their children. Their last move was to Green Bay, WI in 2006. Throughout her life she was content to be with family and enjoyed relaxing and reading when she could. She loved traveling and cherished the times she and Jeff spent on vacation. Emily loved wearing beautiful jewelry and dressing up. She especially enjoyed dancing with Jeff and was proud that they won a dance contest when they were young. She loved sewing, especially for her twin daughters. Clothes shopping was an enjoyable family event. Emily is survived by her identical twin daughters and their spouses Stephanie and Doug Rolfe, Indianapolis, IN; Pamela and Clyde Van Haren, Green Bay; two grandchildren Karleen (Duane) Bolin; Jeffrey (Rachel) Hawkinson; three great-grandchildren Seth, Margaret & Hannah Bolin. She is further survived by other relatives and friends. Following a private gathering held for the immediate family at Hansen’s Serenity House, a memorial service for family and friends will be held on Sunday, March 7, 2010 from 1:00 p.m. to 3:00 p.m. in the Chapel at Brookview Meadows Retirement Community, 1740 Condor Lane, Green Bay, WI. On Wednesday, March 10, 2010 visitation for family and friends will be held from 11:30 a.m. to 12:00 a.m. in the Chapel of Memories at Toledo Memorial Park Cemetery, 6382 Monroe Street, Sylvania, OH. Funeral Service will be at 12:00 noon in the chapel. In lieu of flowers a Memorial Fund has been established. A very special thank you is extended to the CNA’s of Brookview Meadows Retirement Community for all of their excellent and expert care, and for the kindness and dignity shown to Emily and her family. Her family is also grateful for the love and endearment she felt from the entire staff and residents of Brookview Meadows. In addition, the family expresses a warm appreciation to SouthernCare Hospice.

The family of Emily Jeffers created this Life Tributes page to make it easy to share your memories.

Send flowers to the Jeffers family.