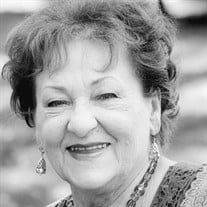 Eleonore “Loni” Koronkiewicz, 80, Green Bay passed away on Thursday, July 20, 2017. Loni was born on February 5, 1937 in Piotrkow Trybunaski, Poland the daughter of the now late Alfred and Adele Verworren and after experiencing some of the trials and hardships of W.W. II her family migrated to Crystal Lake, Illinois. Loni, working in various jobs and positions, met her future husband in the kitchens of Sara Lee Bakery delicious goods. They were married on August 23, 1968 in Chicago, they lived in Chicago and suburban Bolingbrook. During that time, they welcomed two boys and a girl into their family. After their children became adults, Loni and Larry moved to Green Bay in 1993. They became members of Ascension Lutheran Church in 1994 and enjoyed the fellowship and concerned prayers there. Loni is survived by her husband, Lawrence “Larry” Koronkiewicz, three children, Jason (Carole) Koronkiewicz, Matthew, Michelle (Christopher) Buckman, five grandchildren, Marissa, Nicholas, Ashley, Danielle and Brennan. She is further survived by her younger brother Georg Verworren and various relatives considered cousins. She was preceded in death by her parents Alfred and Adele Verworren and Younger brother Otto. Gathering of family and friends will be held from 12:00 P.M. (Noon) to 2:00 P.M. On Saturday, July 22, 2017 at Ascension Lutheran Church ELCA 2911 Libal Street, Green Bay. A Service of Remembrance will be held at 2:00 P.M. with Rev. Lori Swenson officiating. In lieu of flowers and other expressions of sympathy a memorial fund has been established in her name. The family would like to offer a warm note of appreciation to the staffs of St. Vincent Hospital 9th floor for all of the loving care and compassion as well as their guidance~ your kindness will never be forgotten.

Eleonore &#8220;Loni&#8221; Koronkiewicz, 80, Green Bay passed away on Thursday, July 20, 2017. Loni was born on February 5, 1937 in Piotrkow Trybunaski, Poland the daughter of the now late Alfred and Adele Verworren and after experiencing... View Obituary & Service Information

The family of Mrs. Eleonore Koronkiewicz created this Life Tributes page to make it easy to share your memories.

Send flowers to the Koronkiewicz family.