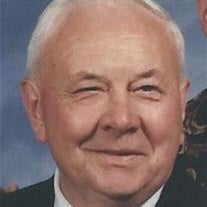 Elden “Elle” L. Dahlke, 83, Green Bay passed away on Saturday, March 7, 2015. Elle was born on January 14, 1932 in Denmark, the son of the late Walter & Louise (Borchardt) Dahlke and grew up working on the family farm. Elle also worked at Hebel’s Corner Cheese (later known as Novak’s Cheese). On July 21, 1962 he married the love of his life Nancy Watzka at Holy Trinity Catholic Church in Pine Grove. Elle left Novak’s cheese to accept a custodial position at St. Bernard’s School where he and Nancy were faithful and active members of the church. He loved his job and always considered the school children and teachers as extended family. After retiring from the school he took a job at Copps Food Center and was there for over 12 years. Elle loved playing cards and enjoyed their neighborhood Sheepshead card club. He loved making booyah for the church picnics. Elle enjoyed taking family vacations and the many trips with Nancy both across the States and abroad. He loved the Chicago Cubs and watching the Packers as well as listening to his Polka Music on Sunday mornings. Elle cherished his grandchildren and was one of their biggest fans, always cheering them on. He was a loving husband, father and grandfather who will be lovingly remembered and sorrowfully missed. Elle is survived by his wife Nancy, three daughters and two sons-in-law Sue Dahlke, Sharon and Steve Noel, Sarah and Tony Pinchart, 4 grandchildren Tyler and JillAnne Noel, Nicolas and Jacob Pinchart, grand cats and dogs, one brother Gerhardt Dahlke, brother-in-law and sister-in-law Jack and Kathy Watzka. He is further survived by nieces, nephews, other relatives and friends. He was preceded in death by one brother Edgar Dahlke, two sisters-in-law Vivian and Marion, his father-in-law and mother-in-law, Melvin and Christina Watzka. Gathering of family and friends will be held from 8:30 A.M. to 11:00 A.M. on Saturday, March 14, 2015 at St. Bernard’s Catholic Church 2040 Hillside Lane. A Mass of Christian Burial will be held at 11:00 A.M. with Rev. Bob Rhyner officiating. Entombment at Shrine of the Good Shepherd Chapel Mausoleum. The family would like to offer a warm note of appreciation to the staffs of Unity Hospice especially Melanie and Molly for all of the loving care. Also, a special thank-you to the staff of Century Ridge for taking excellent care of Elle~ all the little touches that you did to make his stay easier will never be forgotten. Mom, Thank you for taking care of Dad these past few years; it has shown us the true meaning of love, patience and kindness. Your three girls Daddy, Every time we hear a Polka we will smile and think of you. You are now one of God’s angels, continue to watch over us until we meet again. Love, Your three girls

The family of Mr. Elden "Elle" L. Dahlke created this Life Tributes page to make it easy to share your memories.

Send flowers to the Dahlke family.