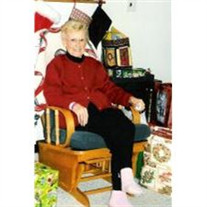 Elaine C. Hansen, 82, De Pere, passed away on Sunday, January 03, 2010 after a brief battle with cancer. Elaine was born on April 24, 1927 in Green Bay the daughter of the late John and Marie (Motiff) Sinclair. She was a graduate of Green Bay West High School with the class of 1945. On July 23, 1955 she married Richard O. Hansen at St. Joseph Catholic Church and together they celebrated over 54 years together. Elaine was a loving wife, mother, grandmother, great-grandmother and will always be lovingly remembered and sorrowfully missed. She held various positions of employment in the Green Bay area but her job as a homemaker was the most important to her~ and she was great at it! Elaine loved to socialize and have a good time. She was an avid Packer fan who attended the famed “Ice Bowl” in 1967. Elaine also enjoyed entertaining family and friends. Elaine is survived by her husband , Richard, two daughters and one son-in-law Cherie Gerstner, Mary and Scott Sprangers, one son and daughter-in-law Steve and Sue Hansen, 5 grandchildren, Jessica, Ashley, Tiffany, Ben and Kimberly, 1 great-granddaughter Jordyn. She is further survived by sisters-in-law and brothers-in-law, nieces, nephews other relatives and friends. She was preceded in death by her parents John and Marie, two sisters Katie and Elizabeth, her mother-in-law and father-in-law, and brothers-in-law. In honor of Elaine’s wishes there will be a gathering of family and friends from 1:00 P.M. to 3:00 P.M. on Thursday, January 7, 2010 at Our Lady of Lourdes Catholic Church, 1307 Lourdes Avenue, De Pere. A Celebration of Elaine’s life will be held at 3:00 P.M. with Rev. Tim Shillcox, O.Praem officiating. Online condolences may be expressed at www.hansenfuneralservice.com. In lieu of flowers memorial Donations can be made to Unity Hospice in Elaine’s memory. The family would like to thank the staffs of Unity Hospice for all of their loving care and concern. Also a warm note of appreciation to all of Elaine’s family and friends for their thoughts and prayers.

Elaine C. Hansen, 82, De Pere, passed away on Sunday, January 03, 2010 after a brief battle with cancer. Elaine was born on April 24, 1927 in Green Bay the daughter of the late John and Marie (Motiff) Sinclair. She was a graduate of Green Bay... View Obituary & Service Information

The family of Elaine Hansen created this Life Tributes page to make it easy to share your memories.

Send flowers to the Hansen family.