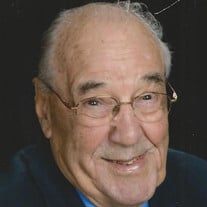 Mr. Edwin “Ed” W. Neveu, 90, a long time Allouez and De Pere resident passed away on Thursday, May 28, 2015 at Odd Fellow Rebekah Nursing Home. Ed was born on August 13, 1924 in Green Bay to Sylvester and Irene (Corbeille) Neveu. He graduated from West High School in 1943, and later served in the Army from 1943-1946 in the South Pacific Area. He was employed by the Hoberg Paper Mill (Charmin), now Proctor & Gamble Paper Products Co., as a Fire Inspector until he retired on August 14, 1984. During his lifetime he was a Past Commander and Life Member of V.F.W. Post # 2027, past President of Local 57 Paper Makers Union, and since 1974 is the Chairperson of the P&G Green Bay Credit Union. He was a Member of Resurrection Catholic Parish and served on the Parish Council. He was an usher at the church and minister to the elderly for many years and started the Adult Server Program for funeral masses. In 1954 he organized and became the permanent chair of the 233 Eng (c) BN. Ed married the former Georgiana (Carlin) Neveu in 1951 in Nashua, Iowa, at the Little Brown Church in Vale. Ed is survived by his loving wife Georgiana, one son and daughter-in-law Peter and Sandy Neveu, Appleton, grandchildren Tracey (Michael) Nass, Kelly (Tim) Nass, Mark Neveu and his fiancé Melissa, Kristopher (Tara) Josephson, Andrew (Kelly) Josephson, Nikki Jesse, Jennifer Glasheen, Michael Neveu and his fiancé Emma and Samantha Neveu, great-grandchildren Lindsey, Nicolas, Alyssa, Cameron, Samuel, Tegan, Lucy, Ruby, Ian, Isaac, Quinn and Boden, Emily and Matthew, his brothers Kenneth and Don, a sister June Kahler. He was preceded in death by his daughter Nancy Josephson, grandson-in-law Jeff Gilson, his parents, brothers Lawrence, Dave, and Alfred, 1 sister and 2 brothers-in-law Eileen (Norbert) Lawrence, Larry Kahler. Gathering of family and friends will be held from 3:00 P.M. to 7:00 P.M. on Sunday, May 31, 2015 at Resurrection Catholic Parish 333 Hilltop Drive, Allouez. A Parish Wake Service will be held at 6:30 P.M. Visitation will continue after 9:30 A.M. on Monday, June 1, 2015 at the church. A Mass of Christian Burial will be held at 10:30 A.M. with Bishop Robert Morneau officiating. Entombment at Allouez Chapel Mausoleum. The family would like to offer a special thank-you to the staff of Unity Hospice and Odd Fellow Nursing Home for all of their care and compassion. Also, a note of appreciation to Resurrection Catholic Parish for providing long term peace and prayer to Ed and his family.

The family of Mr. Edwin Warren Neveu created this Life Tributes page to make it easy to share your memories.

Send flowers to the Neveu family.