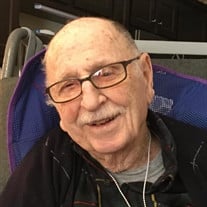 EARL HAZAN (1/21/21 - 2/24/18 Born in Oak Park, Illinois, Earl was one of 7 children of Rose and Sam Hazan who moved to New York City during The Great Depression. Earl entered the U.S. Navy during WW II and worked testing ammunition at the Aberdeen Proving Grounds in Maryland and in Fallbrook, CA. In 1945 he met and married the love of his life, Lois Koosed, a Los Angeles beauty and then entered City College of New York passing up a scholarship to Columbia. As an electrical engineer he and Lois hop scotched from “sea to shining sea” in a series of career moves that took them and their growing family from New York, to Sacramento, California, Opportunity, Washington, Columbus, Ohio, and Barrington, Rhode Island and Palm Desert, California. For 30 years Earl pursued his engineering career in the United States and in Europe designing high voltage power lines for which he received many professional awards from the AIEE. He was always a wonderful writer and following his engineering design work turned his hand to professional writing as an Editor for Transmission and Distribution magazine. He lived his 97 years as a proud son of Oak Park who became a dyed-in-the-wool New Yorker who believed it was the greatest city ever known - though he found something admirable in every town, burg and city he visited. A patient listener, he valued conversation with those who held opinions different from his and believed in speaking about any topic at all. In later years his crustiness and irascibility emerged - he wanted direct communication and all of us will remember his famous statement,”There is no’why’. Just answer the question.” He served on the Bristol County Water Board, RI and was active in many civic projects. He is survived by his wife of 72 years, Lois, and their three children: Loryn Paxton (Charles), David Hazan (Holly), and Sherri Heidel (Rich). He was predeceased by a beloved son, Bruce (Lisa), a deep and tragic loss from which he never recovered. His children and their spouses all mourn his loss, as do his grandchildren: Samantha Paxton; Daniel Heidel (Jenny), Robert Heidel (Sarah), and Madeline Roselius (Tate); Shana Schaefer (Marc), Sam Hazan (Caitlin); and Jack and Lance Hazan; and his seven great-grandchildren - all of whom have stories to tell. He was an avid fan of the New York Yankees, the New England Patriots, and was known for cheering on the Ohio State Buckeyes and, most recently, becoming a true believer in the Green Bay Packers! He lived a full and meaningful life of loving kindness and civic contribution, but at the center of it all, and shining through everything he did, was his devotion to his wife and his love for his children. We remember him with much love and will never forget his example. Moving to Green Bay in 2012, his last years were made especially sweet and easy by the selflessness of his youngest daughter, Sherri Heidel, and her husband, Rich, who cared for and nurtured him and Lois without constraint. The family is most appreciative for the long-term compassionate and loving care he received from Tena Lasnoski of HomeInstead, the staff and residents of Emerald Bay Retirement Community, and, for the last several weeks, Heartland Hospice of Green Bay. Hansen Funeral Home, Green Bay, is assisting the family. Funeral service will be conducted by Rabbi Steigmann at Congregation Cnesses Israel, 222 South Baird Street, Green Bay, Wisconsin at 10:30 a.m., Wednesday, February 28, 2018. Reception follows at Emerald Bay Retirement Community, 650 Centennial Centre Boulevard Hobart, Wisconsin immediately following funeral service. In lieu of flowers, you may donate to a charity of your choice in Earl’s name.

EARL HAZAN (1/21/21 - 2/24/18 Born in Oak Park, Illinois, Earl was one of 7 children of Rose and Sam Hazan who moved to New York City during The Great Depression. Earl entered the U.S. Navy during WW II and worked testing ammunition at the... View Obituary & Service Information

The family of Mr. Earl Hazan created this Life Tributes page to make it easy to share your memories.

Send flowers to the Hazan family.